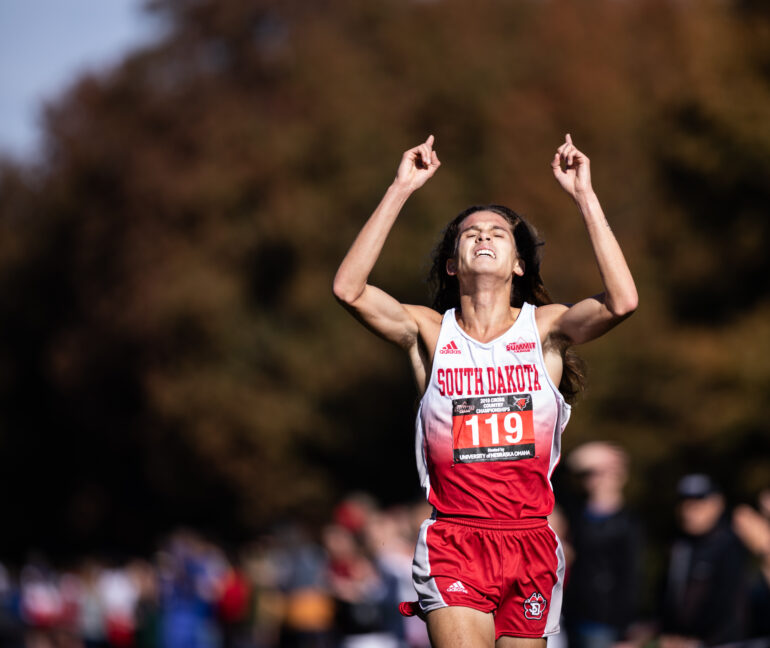 Running any sort of distance isn’t something that excites the general population. However, senior distance runner, Eldon Warner, has been doing it for years and sat down with The Volante to talk about his mental and physical preparation process.

Rachel Newville: How do you prepare when you are getting ready to practice?

So every single time we race we have roughly an hour of warm-up time, and we just go through the same routine that we do for a workout. So it just kind of gets us in that same mental space as we do before work out and whether or not you’re nervous or anything like that, that’s kind of a ‘you’ thing.

I know with myself I just kind of like to walk off and talk to myself beforehand and talk to myself, like “it’s just a race. It’s not the end of the world if you do poorly,” but then again, of course, you want to run very well. It’s kind of a thing beforehand where you tell yourself “you’ve done this a million times over and over in workouts. There is no difference why you shouldn’t be able to do it right now.”

RN: How long have you been running?

EW: I started running when I was in 7th grade, but I didn’t really start really training and competing until my senior year of high school.

RN: Has your process stayed the same that whole time or has there been ebbs and flows in it?

EW: I couldn’t even tell you what I did in 7th grade. In middle school, I would show up to the line in a pair of converse and a pair of basketball shorts and that was my thing. I don’t think I even warmed up. I would just show up to the line and race. Whereas nowadays I definitely have a routine on the day of racing.

RN: Do you see running competitively in the future after you graduate?

EW: I plan on becoming somewhat of a hobby jogger. I will still compete. There will never be a point in my life where I don’t want to compete and run. I’ll do half marathons, marathons if I really want to, 5Ks, road races. But I do plan on slapping on a jersey every once and a while and running an unattached mile, say at the alumni meet or one of the meets nearby, just to see what kind of gears I have. If things end up going super well this year, at the end of the track season I might think on continuing the high intensity, high quality running that I’m doing in college.

RN: What does your training look like week to week, and how does that vary depending on where you’re at in the season?

EW: We have a roughly 20-28 week cycle for training. When you first start the cycle it’s all mileage and low intensity and we’re right now going through that transition phase. We ended cross country season and then that’s when our first cycle ended and started a new one. So ever since then, we should have been doing high mileage, low intensity. I keep at more mileage than I usually would do during competitive season. And as we go throughout the season we lower mileage and increase intensity. We’re just now starting to get to the point where we are starting to lower our mileage a little bit but definitely upping the intensity.

EW: That’s a good question; it really depends where in the race I’m at or what kind of mental space I’m in. Usually, my brain kind of goes blank during the race. I don’t think about all too much during the race. Every once and a while I will come back in when I hear a split, but really I’m not really thinking about all too much. Just focused on keeping my body moving. I don’t really think about all too much until the last lap or two where my brain is going okay your lungs are burning, your legs are tired and I just try to keep that out of my brain and go “okay you have 400 meters left in the tank” until I get to the last 100 or so meters and then I’m just laying all the gas on the line and all I’m thinking is “what’s the fastest way from me to get from here to there.”

RN: Is there anything else you want to add at all?

EW: If you want to get into running, just keep consistent with yourself. One big problem I see with people trying to get into running is they are super on it for like a week and then after the week it becomes kind of a routine that people get bored with. But I just suggest that people stay with it and keep strong and it’ll pay off.