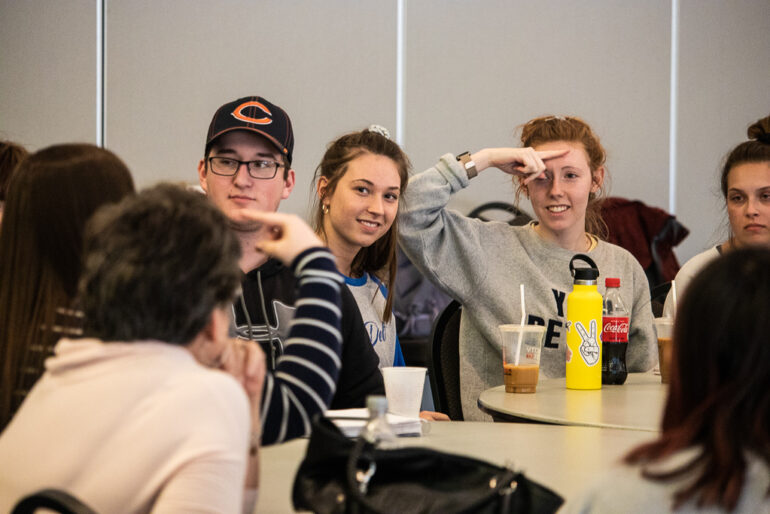 A club came together for a potluck this Monday, but instead of talking about their day during the meal, they silently signed to one another.

The American Sign Language (ASL), rebooted this semester after a seven-year haitus, holds a silent dinner once a month.

Alexis Sejnoha, club president, decided to start the club again after hearing about the old club in one of her ASL classes.

“I’m in the honors program and when I started working on a thesis project and coming up with an idea I was trying to decide what I wanted to do and I’d really become interested in deaf culture,” Sejnoha said. “There used to be an ASL club, but then it kind of died off when some of the members graduated and I said ‘Well you know what, let’s revive it. Let’s do it.’”

Veronica Steinhoff, vice president of the ASL club, said the club is a step towards awareness for the deaf community.

“I know a lot of community members who are deaf now know about these events and feel like their environment is getting shared to other people, so I think that’s really important,” Steinhoff said.

Steinhoff said they were surprised at how fast their group grew. Sejnoha said social media and ties to the deaf community have helped draw people to the club.

“We have a social media chair and some secretaries that do a lot of stuff like that, and my nephew is deaf so I’m kind of getting involved in the deaf community as well,” Sejnoha said. “Dr. (Teri) Bellis obviously is very involved in the deaf community and Lori Kober. So they’ve been really helping kind of spread the word and get people interested.”

Alexis Yim, a member of ASL, said the club is important because ASL is a culture too.

“Some people know like little signs that they’re teaching kids now and like I feel like it should just be known to the campus,” Yim said.

In the fall, Sejnoha said she plans to present her thesis as a deaf community awareness event.

“Informing people about deaf culture and talking about things like how do you approach a deaf person? How do you walk between two deaf people who are signing without being rude?” Sejnoha said. “Really just trying to educate so that the students here when they move onto their greater careers after graduation they know how to handle those situations when they come into them in the real world.”

“Teaching sign to people who want to learn sign but maybe can’t get into the class because there’s a really long waiting list,” Sejnoha said. “Just learning some sign that we can use if we are ever in that situation.”