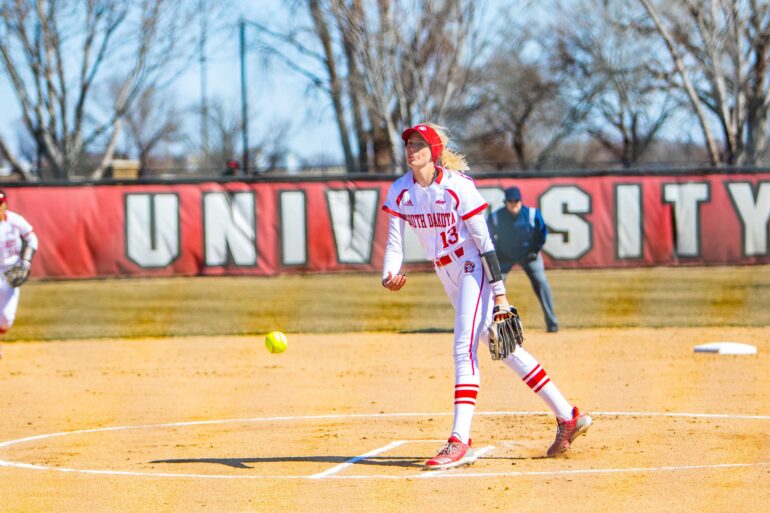 The Coyotes defeated Purdue-Fort Wayne 6-0 on a chilly Sunday afternoon at Nygaard Field to sweep the series.

Redshirt-sophomore pitcher Alexis Devers said that the first couple innings were a bit of an adjustment period for the team.

“It’s getting used to the umpire’s strike zone, being the home team, you have that first inning of ‘is she a wide zone? Is she a narrow zone?’ that kind of thing and especially when we’re hitting, you have a pitcher that we haven’t faced yet,” Devers said.

While the beginning was relatively quiet, the Coyote offense erupted in the third inning.

With senior catcher Jessica Rogers and senior infielder Dustie Durham on base, sophomore catcher Skylar Arellano hit a single which led to two runs, and the Coyotes took a 3-0 lead. That was just the start.

Senior left fielder Ashtyn Blakeman hit a single up the middle, allowing Arellano to score, and the score moved to 4-0 Coyotes.

Junior center fielder Camille Fowler added to the offensive outburst with a single up the middle as well. That hit, followed by a PFW pitching error, enabled Blakeman and Wobken to score. After five runs in the third inning, defense and pitching held up their end of the game to protect USD’s 6-0 lead and third straight shutout, per GoYotes.

Blakeman said that the team utilized their practices in the days leading up to the game to prepare.

“We all worked on the plan, executing everything that we needed to, so I felt like we were all confident coming in to these games,” Blakeman said.

Softball is a game of inches, and USD head coach Robert Wagner said his team was fortunate that some 50-50 calls went their way.

“We got a couple lucky breaks. They (the Mastodons) were walking a few kids, and they had a couple errors in that inning. Then there was a ball down the line that could’ve gone either way and the call went our way,” Wagner said.

The softball team’s record last season was 17-38 and Wagner said that he’s seen a lot of improvement this year.

“Last year, we had three shutouts all season, and so to have three shutouts in one weekend, you can see the improvement that they’ve made and the work they’ve put in and it’s starting to pay off,” Wagner said.

Up next, USD travels to Ames, Iowa to take on the Iowa State Cyclones (18-15). In a previous meeting between the two teams this season, Iowa State bested the Coyotes 2-1 in nine innings. USD’s next home game will be against Creighton on April 3.