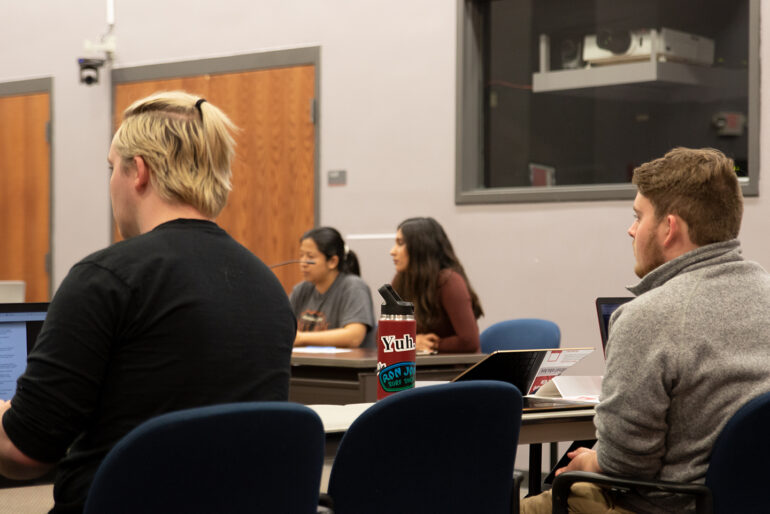 Campus
SGA meets in the Freedom Forum for the final time of the semester Tuesday night. Cecilia Gillen | The Volante

One missing amendment was added into the constitution while another’s validity was questioned at SGA’s last meeting of the semester.

Amendments that were passed in previous administrations, but never made it into a physical document, were addressed by Brady Jandl, director of operations.

Jandl argued the amendment to the fiscal guidelines regarding who can vote on student organization clothing and food exemptions was invalid.

“There were some concerns voiced that it should have been handled by the committee based on some precedent, however, there is newer precedent showing that it would be voted on by the entire senate, ” Jandl said.

Sen. Amber Hulse said the bill would be correct as is because of new legislation replacing the old amendment.

“While that piece existed…we passed a different piece of legislation that was talking about the same thing and that got put into existence after this happened,” Hulse said.

This precedent being the online document of the bill amending the fiscal guidelines on food and clothing exemptions. In the document, it states senate votes on these appeals.

However, this document never accounted for the floor amendment, that is not a precedent, to the bill that was passed to say the budget or finance committee would vote on the appeals. This means that when the bill was added to the overall changes of the fiscal guidelines, it was misguided without the proper addition of this floor amendment, which still stands regardless of what the document now states.

As a result, the bill would need to be amended or have the missed floor amendment added to represent the bill’s true intended purpose.

The Internal Review Committee met after the meeting to further discuss the issue.

An attendance bylaw amendment passed in 2014 was officially added to SGA’s bylaws.

It states any senator or executive member anticipating absence of more than four meetings must relinquish their position, Jandl said.

“It should have been enforced through many administrations now,” Jandl said.

Sen. Kevin Huizenga originally brought it to senate’s attention after digging through SGA’s old meeting minutes and bills. He found a discrepancy between minutes saying the amendment was passed and found the current bylaws did not reflect that.

“I think it’s important that it got added just for the sake of transparency overtime, making sure that our bylaws represent all of the will of the SGAs that have come previous to us and if they no longer reflect that then we amend to change them rather than having them just disappear into obscurity,” Huizenga said.