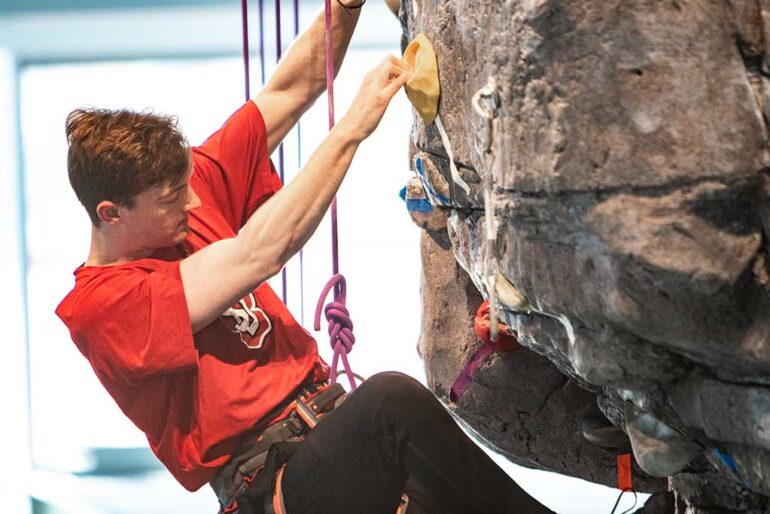 It is a nearly impossible feat to win an Athlete of the Year award in the Summit League if you only compete for three weeks.

However, junior Isaac “Butters” Morris captured the Summit League Diver of the Year after missing most of the season recovering from a torn ACL while rock climbing.

“Just over the summer, taking a break, I fell and hurt myself,” Morris said.

Rock climbing is one of Morris’ favorite things to do outside of the pool. The recovery process was not an easy one, one that is still ongoing.

“Being diligent with doing rehab every day was the hardest part (of recovery),” Morris said. “I didn’t feel like there was much progress week to week, but then month to month it was a lot more visible. At this point I’m just trying to get all my dives back because I haven’t done a lot of them since last year.” he added.

Morris said he uses rock climbing as a bit of an escape, a tool to grow focus and mental toughness.

“Focus and mental toughness is something that translates well between the two,” Morris said. “In rock climbing, it’s just you up on the wall or the rock and same with diving. It’s just you on the board so you can only count on yourself, can only blame yourself.”

Morris has picked up quite the nickname from his peers. He was given the nickname “Butters” by his teammates when he started to dive.

“When I started diving, I was really skinny,” Morris said, “My teammate told me I needed to eat more butter, so then it stuck.”

Butters now has two Diver of the Year awards to his name, with the possibility to claim a third next year in his senior season.

“It’s really nice, a good achievement to get. I didn’t really think I would get it because I didn’t dive for most of the year, but it’s pretty cool,” Morris said.

Morris holds the school record in both the one and three-meter dives. He also holds the DakotaDome pool record in those same events. Morris has qualified for the NCAA Zone Qualifying Championships the last two seasons as well.

Morris looks to improve off of a shortened season, and added competition might influence that, he said. Next year, the diving team will grow from four to six members.

“His teammates are going to improve and it’s going to help him improve with more competition at practice every day,” assistant coach Kris Jorgensen said.  There are going to be more people competing for those top spots at every meet. The level of the entire team keeps growing every year when you have people coming up behind you.”

This season, Morris was the only non-freshman men’s diver, but next year with the added experience the entire team should see an uptick. Hudson Wilkerson qualified for Zones, and narrowly missed advancing to the finals in the one-meter dive. The addition of two more divers should increase what looks to be a promising men’s diving team next year.