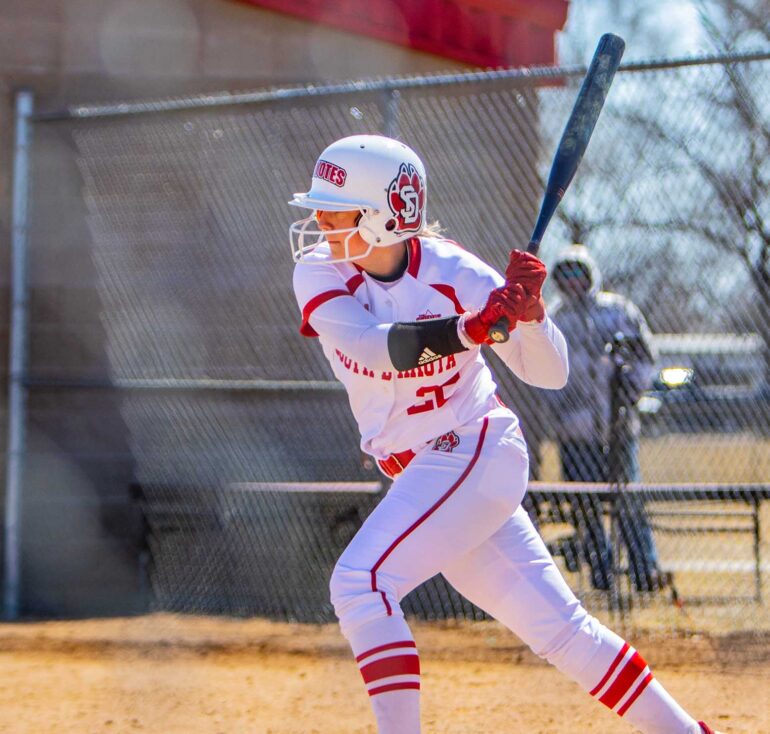 Coyote softball completed a three-game sweep against Omaha in Vermillion on April 6 and 7. The Coyotes bested the Mavericks 5-4 and 4-0 in the doubleheader Saturday and 9-1 on Sunday. Senior Dustie Durham led the way on Sunday, going 3-for-3 with a two-run homer. Fellow senior Alyssa Fernandez crossed home plate four times in the game. The Coyotes (25-8) now have a half-game lead over North Dakota for first place in Summit League play.

“The whole team had a part in it,” Durham said. “Whether it was on the field or in the dugout. We stayed up and we all fought together as a family. I try my best to stay positive and to keep everyone up. I stay loud in the dugout and try making it more fun. Also remind them of who we play for, the name we wear across our chest.”

Entering the top 10 for career Runs Batted In at USD is senior Jamie Holscher with 97. Three of those came this weekend, moving her total to 41 on the season. Holscher upped her batting average to .400 for the season, leading the Coyotes.

Fernandez leads the Summit League with 34 runs after the series. On Sunday, she scored in the first, driving in two runs with a base hit and came around scoring in the second. She reached on an error and scored on a Durham base hit in the fourth, and walked and scored the winning run in the sixth. She was 4-for-5 during the series with three walks and a hit by pitch.

Freshman pitcher Grace Garcia said her two favorite parts of the game were: “(sophomore Dylan Underwood) hitting her first collegiate home run… and great pitching in both games from Devers and Dustie.”

Pitcher Alexis Devers only permitted one hit in the first four innings from the Mavericks Sunday. Her victory ties Durham for second place in the conference.

“I think the two games went pretty well,” Durham said. “I think that even though it probably wasn’t our best games. We kept fighting to stay in it and win them. So I’m proud we stayed up and kept fighting. It was very important to win these games at this time of the season. We are fighting for a championship and every game counts.”

The games marked the halfway point through Summit League play.

“These games prepared us for the conference championship by showing us what we need to work on and prepare for against the better teams,” junior outfielder Alexis Egan said. “We have plenty of season left and we cannot afford to take any games off. We have to take care of business every single game in order to reach our goal.”

USD hosts a three-game series with North Dakota next Saturday and Sunday: a doubleheader beginning at noon on Saturday and the third and final game at 11 a.m. on Sunday.