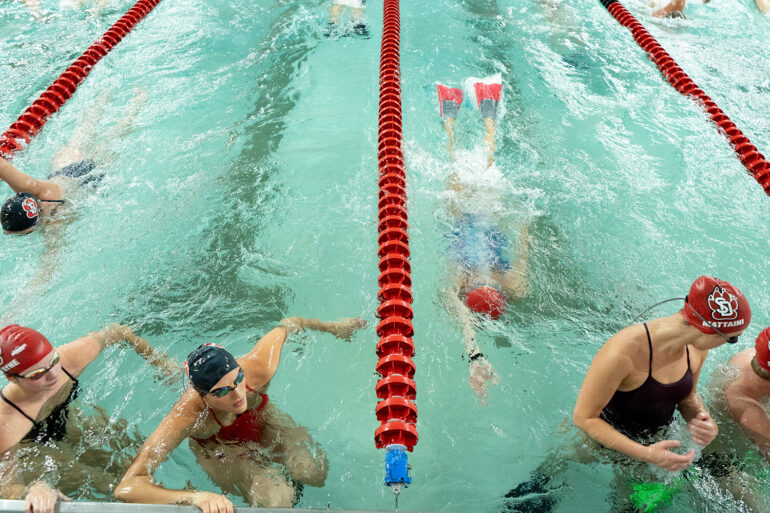 Sports
The Coyote Swim and Dive team congregates at the edge of the pool during practice. Aaron Mercado / The Volante

After second place finishes for both the men and women at the Summit League Championship last year, USD’s Swimming and Diving team is looking forward to the start of their season.

Over the offseason, the team saw a change in leadership as they welcomed new head diving coach Chris Pape to the pack.

Pape completed his graduate degree at USD and spent the last six years coaching at Lindenwood University, D-II school in Saint Charles, Missouri. Pape said he is excited to see how much the diving “kids” grow over the season.

“This group of kids loves learning and loves getting better and they all want to get better,” he said. “They are just listening and absorbing and trying and willing to learn. They’re willing to fail in order to succeed.”

Throughout the preseason, athletes have adapted to Pape’s coaching philosophies. Sophomore diver Anthony Mudek said having a new coach has helped him understand technical issues he didn’t even know he was having.

“I’m learning a lot more than I thought I would,” Mudek said. “He has a strong focus on basics, which helps us master the harder dives.”

Early in the season, Pape is focused on basic diving skills. He said in order to have more fun later in the season, they have to build the fundamentals.

“Mastering (the foundational skills) right now is important, but it’s not required,” Pape said. “The first thing athletes learn is the last thing they master.”

Pape welcomes mistakes, he sad. He tries to get athletes to recognize how it feels to make mistakes while diving, which he compares to how it feels when the dive is done correctly.

“Having the idea and knowing when you’re making the errors and how to fix them is more important than being able to fix them,” Pape said. “You obviously want to be able to do it right, but you have to know what it’s like when it’s wrong versus when it’s right. It’s okay to mess up if it helps them get better in the long run.”

Junior diver Haley Pederson said Pape has helped the team improve the atmosphere outside the pool.

“Diving is such a mentally tough sport, so when you have that person to back you up and who believe in you only helps you get better,” Pederson said. “We have always had really good diving chemistry, but having him just adds to that positive energy.”

Pape said the transition from a Division-II university to a Division-I university hasn’t changed the way he coaches. The rules may differ, but the ability to build a program is the same.

“I don’t coach these guys any different than the way I was coaching those D-II athletes. We had high-level kids there and we have high-level kids here,” Pape said. “The coaching doesn’t really change; the philosophy doesn’t change, ideas and concepts are all still the same.”

After a long preseason, both athletes and coaching staff are excited for competition to begin, Pape said.

“(The first couple meets are) always exciting to see what the athletes step out and do. Divers and athletes, in general, can be a completely different person in practice then they are at a meet,” he said. “They get to that competition and some of them flip a switch and they’re either amazing, bad or just the same. It’s going to be fun to see what we have to offer.”

The Coyote Swimming and Diving’s opening Alumni Meet is Friday, Sept. 26, beginning at 6 p.m. in the DakotaDome pool.