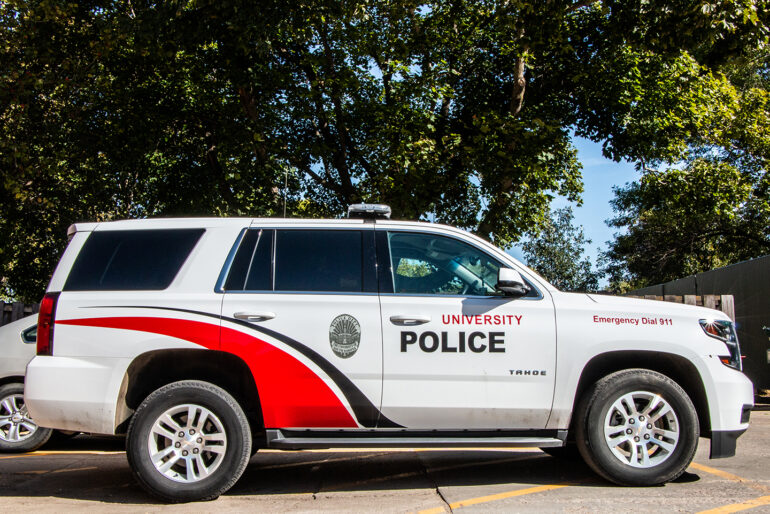 Campus
UPD has the same authority as VPD, but their jurisdiction is limited to campus. Together, the two patrol Vermillion. Lexi Kerzman | The Volante

In an average week, VPD receives 130 calls – this D-Days, they had 260. This number, although double a normal week, it is lower than previous D-Day celebrations.

“Also, maybe there is a culture shift, we’ll see if it keeps going,” Betzen said. “Generally speaking, I think we saw a lot more assaults 10 years ago. Now people are distracted by phones.”

Some of the phone distraction is thanks to the VPD and the Clay County Sheriff live-tweeting out low severity incidents. Betzen said this creates a more transparent relationship between community members and the police.

“It’s easy to get angry at the person you never see and never know, but it’s a lot harder when you are able to talk to them and engage with them and you realize they kind of talk just like you,” Betzen said. “Those are the things Twitter does for us. It adds a layer to transparency, even though obviously we don’t share everything.”

While the Twitter feeds were full of humorous posts throughout the homecoming weekend, Betzen said they are only funny to try and get engagement.

“If you don’t have engagement it doesn’t matter. For non-emergency type things we want to be able to engage people in a real-time way,” Betzen said. “The reason we engage in the Twitter page is not really to be funny or anything but to make sure people are paying attention to social media so we can use it as a venue to get information out.”

As most of the incidents that occur over D-Days involve downtown Vermillion and alcohol, the state also provided funding to install cameras down Main Street.

Security cameras, Betzen said, help end questions on what actually happened during an incident; now there is evidence on what exactly happened and who is to blame. They also help limit the number of incidents that occur.

“Over and over again prior to the cameras we would have fights, way more drinking than we do now, larger groups and the number one purpose of the cameras is to deter that behavior,” Betzen said. “Everyone can agree that, generally speaking, most people behave better when they know they’re on camera.”

The security cameras are only downtown for the week of D-Days because they are too expensive and not necessary the rest of the year, Betzen said.

While VPD patrols downtown and most parts of Vermillion, UPD is in charge of keeping the USD campus safe.

Although often misunderstood, UPD has all the same legal powers as VPD and regular police departments. The only difference is that they mainly patrol the school, Bryant Jackson, UPD administrative sergeant said.

“We try to divide up the responsibilities. We work together really well,” Jackson said. “There are some reasons that we have to, just being in the same city, we have to work together.”

Both Jackson and Betzen said their main concern over D-Days, and every day, is safety.

“At the end of the day, we are big supporters of D-Days as well,” Jackson said. “We want to make sure there is a safe environment for people to celebrate throughout the weekend.”