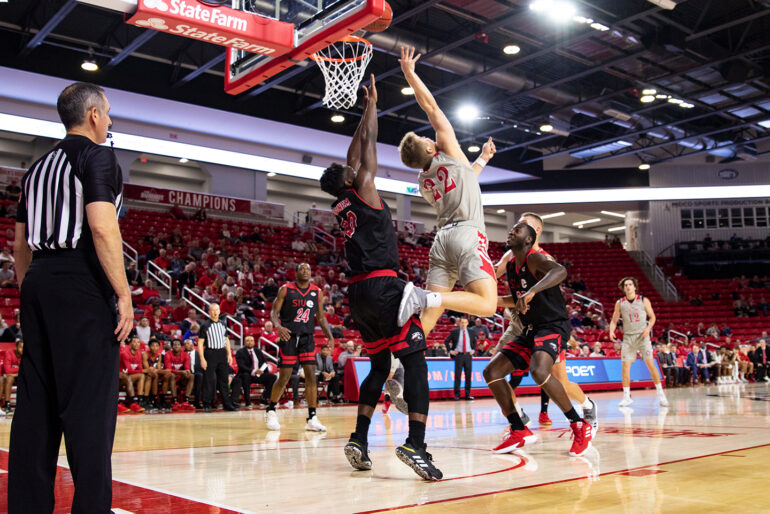 Tyler Peterson led the Coyotes (5-0) with a season-high 15 points on 6 for 7 shooting. Junior guard Stanley Umude followed with 14 points — all in the second half. Redshirt-senior Tyler Hagedorn scored 13 points and boarded a season-high 14 rebounds, snatching his first double-double of the year.

SIUE (2-3) gained a 14-10 lead before the first half’s midway point, but sunk into a seven-minute scoring drought where USD gained a lead and didn’t give it back. The Coyotes entered halftime with a 32-27 lead, backed by Peterson’s 10 points on 4-for-4 shooting and a 50% shooting percentage from the rest of the team.

USD opened the second half sluggishly on offense, unable to pull away from SIUE until a 19-8 run through the latter part of the half. With 1:13 remaining the game, Umude threw down an oop from Peterson, punctuating USD’s fifth consecutive win to open the season.

“It was it a grind-it-out game,” USD head coach Todd Lee said after the game. “I talked to the guys (and told them) really good teams find different ways to win and tonight it was on the defensive end.”

USD leads the country in 3-point percentage at 51%, and though they didn’t shoot the ball well Monday, Lee said he’s surprised at the vast improvement from early this season.

Now, it’s on to the next issue: developing the bench, Lee said. Senior guard Brandon Armstrong led the five non-starters with six points, hitting back-to-back threes late in the second half, but increasing the bench’s use will ease seniors Triston Simpson and Peterson demand later in the season.

“We’ll see where we’re at in four games, but you couldn’t ask for anything more to start the season.”