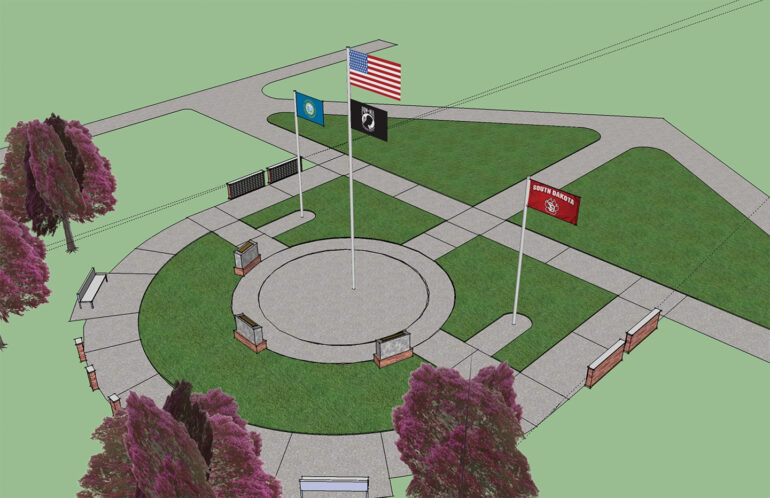 Campus
A rendering of the Patriot's Plaza located in between Beacom School of Business, the School of Law and Al Neuharth Media Center. Submitted | FourFront Design Inc.

An outdoor monument to honor USD’s veterans of past, present and future could be completed by next fall.

MORE: One nation, one veteran’s​ story

USD President Sheila Gestring revealed plans for the project at the State of the University address in September, announcing the university is matching half of the $200,000 fundraising goal. The USD Foundation has raised $35,000 and is kicking off its official fundraising campaign at the Military Appreciation Football game on Nov. 9.

“I asked [USD Foundation President Emeritus Ted Muenster], ‘if the university can match the number of dollars raised, can we get this thing done?’” Gestring said. “He thought, ‘most definitely.”

The memorial will consist of three monuments dedicated to the Medal of Honor recipients, additional donor memorials, military insignias on columns, two flagpoles with the U.S., P.O.W., South Dakota and USD flags and benches for sitting, according to Brian Limoges, assistant vice president of facilities management.

The project’s conception derived from a student named Kristzian Fasi.

Fasi, who served five years in the Navy before enrolling at USD, saw two American flags displayed on campus — in front of the DakotaDome and outside Al Neuharth Media Center. He decided that two wasn’t enough and began carrying his own across campus.

Soon after, Associate Business Professor Greg Huckabee, who’s now part of the Plaza fundraising committee, approached Fasi and asked why. Together they formed a plan, and this summer will see it manifest on the lawn west of the Muenster University Center.

Gestring said the university chose the location because “it’s about the only place on campus” it would work.

“It feels better as a place of reflection,” Gestring said. “You don’t want to put anything in front of Old Main. You have to be able to see that driving down University. If you put it over by Patterson, I feel that it’s too open.”

“Those are the three pillars of America right there,” Sundberg said.

Correction: The Volante initially stated Fasi was a former student. He is still enrolled at USD. The Volante regrets this error.