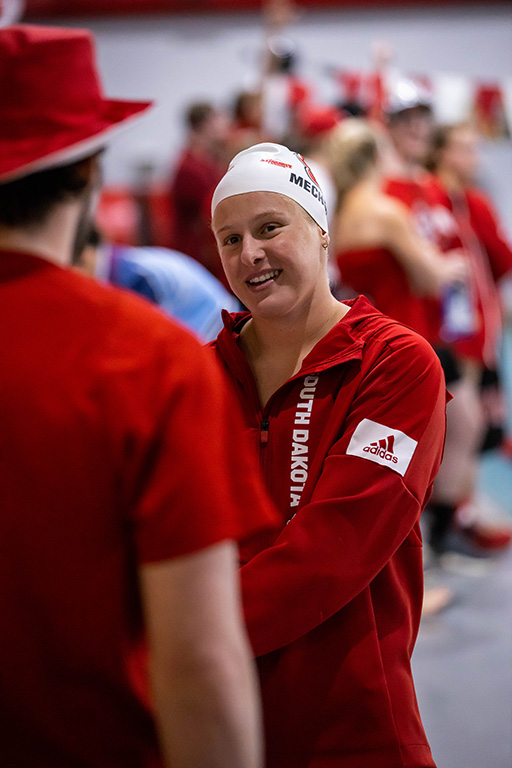 Dedicating 20 hours a week to the water is challenging. Surviving four years of college with a 4.0 GPA is no easier feat. Senior health sciences major Charlie Mechling has accomplished both of these all while preparing for the next phase of her life: occupational therapy school.

The Colorado native’s ability to balance school and sport has led her to the next step in her life, attending the number one OT school in the nation, Washington University in St. Louis, for her graduate degree.

“I am super excited,” Mechling said. “I think it will be the best positive avenue I could take. They give you every single possibility throughout OT and you get to choose what you’re passionate about within it and do that.”

After she completes her schooling, she said her goal is to be somewhere she really enjoys and can call home.

“I don’t know if that is going to be abroad or in the United States,” Mechling said. “But then to work as an OT in what sector I choose to be in.”

For the last two years, Mechling has been one of the captains of the USD swim team, leading through the example she sets for her teammates.

“It’s been really special,” she said. “It is definitely the best part of my college career. Good leaders are people that you can watch to see what they do when there are good things and bad things, someone that is a role model and relatable to others.”

When she isn’t busy with school and leading the swim team, she heads out to eat with her friends at Silk Road and Red Steakhouse. Along with going out to eat, she also enjoys cooking.

Growing up, Mechling was involved in gymnastics but, she said things changed when she was diagnosed with Rheumatoid Juvenile Arthritis. After hearing doctors say she wouldn’t be able to participate in land based sports anymore, she focused on her love for swimming.

“It was probably a good thing because I was crappy at all the other things,” she joked.

Her inspiration to start swimming, she said was her mom.

“It was our biggest thing as a family; my mom swam, she went to UCLA and swam so she was already into it,” Mechling said. “We were a big swimming family so that just made everything easier.”

Mechling gave another light-hearted response when she said her goal was to swim at the collegiate level from the beginning.

“We didn’t grow up as a family where I did just a little bit of swimming, it was like, ‘woah, swarm’, all swimming all the time; so, swimming in college was always the number one thing I wanted to do since I started.”

Mechling said both her swim career and having arthritis helped shape the route she wanted to take in school.

“Having Rheumatoid Arthritis, I had an OT when I was little. I didn’t know who she was or what she was but I thought what she did was really cool,” Mechling said. “I could go in everyday and play with some kids that seems pretty easy.”

Mechling said swimming and OT are both big on the little details and that this similarity helped push her towards this career path.

“I ended up choosing (OT) over PT because they always say you can use physical therapy to get up and walk to the door, but you need OT to open the door and use it and to me that is what’s important, the little things that affect your life so much,” Mechling said.