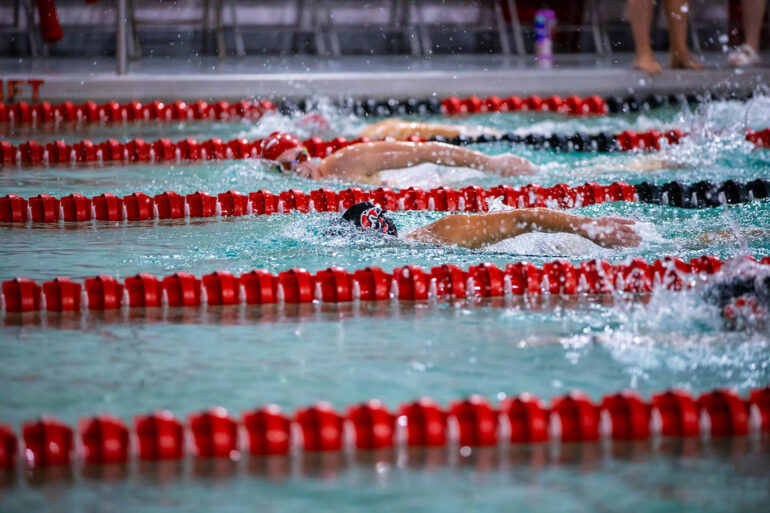 The Coyote men and women’s swim and dive teams placed second at the Summit League Swimming and Diving Championships Feb. 19-22.

Sophomore Jake Leichner said he was pleased with the team’s performance.

“Overall, our team had a pretty good weekend,” Leichner said. “We hit where we wanted to and we’re always striving to get better.”

“I felt pretty good going into finals after qualifying where I did in the prelims,” Leichner said. “My teammates gave me the comfort I needed, we all had each other’s backs and we want to push to score as many points as we could for the team.”

Senior Sarina Sabadeanu competed in her final Summit League Championships, earning all-conference honors in two relays and one individual event. Sabadeanu was joined by Meghan Atwell and Jordyn Schnell in both of the relays.

Sabadeanu, Atwell, Schnell and Madilyn Sindelar placed second in the 200 medley relay. Ashley Storm joined Sabadeanu, Atwell and Schnell to bring home third in the 200 free relay. Sabadeanu’s lone individual honor came in the 100 backstroke, where she placed second and teammate Lucie Anderson finished behind her in third. Anderson moved into fourth all-time for USD in the event.

“Over the last couple of years, this group has grown really close together,” Pederson said. “We bring really cool energy into every meeting, every practice. I’ve seen how the process works. It’s going to work, I’ve seen it for three years now and I just have to trust that it’s going to keep working.”

Senior Isaac Morris was cleared to compete one week before the championships and didn’t qualify for NCAA Zone Diving, but was able to compete in his last Summit League Championships nonetheless.

“Isaac Morris got cleared a week before the meet to even go, and to finaled in three-meter, top eight, and was ninth in the one-meter,” head coach Jason Mahowald said. “Just a gutsy performance for a kid who wanted to finish out his career.”

The four-day competition was busy for some. Leichner competed in seven different events. He said with events having more than one round, the days just start to blend together.

“It seems to go by really fast,” Leichner said. “The last day, I kind of woke up and I’m like, ‘what did I do the past couple days?’ because I don’t remember doing any of this stuff and apparently I did.”

Mahowald said he was happy with the team’s performance overall. Of the seven sessions that took place, he said he thought the team performed at its best in all but one, the Thursday morning session.

“From our relays to individual swims, to diving, top to bottom, everyone showed up,” Mahowald said. “It’s a seven-session meet. We only had one session where we performed not as well as we could have. After that Thursday morning, every session our kids just showed up and swam lights out.”

The Coyotes finishing behind Denver is not something they look down upon. USD’s focus has been on beating themselves, Mahowald said.

“We’ve never really talked about trying to make that move (to close the gap on Denver),” Mahowald said. “What we’ve talked about is being better versions of ourselves and being the best that we can be. We have some limitations on us, but we fight to overcome all those.”

Sabadeanu is one of a handful of seniors nearing the end of their careers at USD after the Summit League Championships. Sabadeanu collected 17 all-conference honors throughout her career. Sabadeanu holds or is a part of seven school records.

Sabadeanu is also in the top 10 in three other events. She ranks third in the 400 individual medley, fifth in the 100 butterfly and eighth in the 100 freestyle.

“I’ve competed in the Summit League championships for four years and I’ve always learned things each year that I didn’t know and built upon that,” Sabadeanu said.