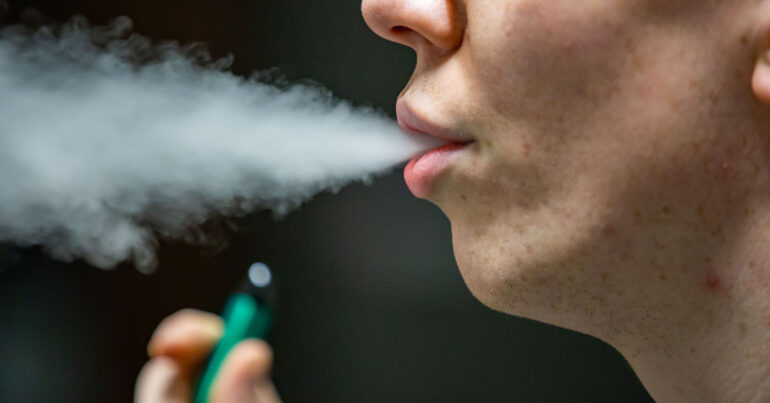 USD students might see a change in their vape pens and other nicotine products. Legislation proposed in the South Dakota Legislature aims to crack down on youth nicotine consumption by eliminating flavored Juul pods, which proponents of the legislation said target underage consumers.

Two bills regarding nicotine, House Bill 1063 and House Bill 1064, are before the state legislature. HB 1063 would bring South Dakota state law in line with federal legislation passed last December, raising the minimum age to purchase nicotine or tobacco products to 21. HB 1064, meanwhile, would make the sale and possession of flavored vapor products illegal.

Thomas Horton, professor of law at USD, said he sees some issues with the bills.

“It seems like it’s going to be a very inefficient and ineffective use of law enforcement activities,” Horton said.

In 1988, the South Dakota Legislature raised the drinking age to 21 in response to federal pressure. This legislation exempted current 18-year-olds, something HB 1063 doesn’t include.

Horton said he thinks there is pressure on the legislature to do something about tobacoo.

“I think they want to do something aggressive and hard-hitting,” Horton said.

Brian McDonald, the Vermillion store manager for Flamez, a Minnesota-based tobacco and vapor shop, said he also sees problems with the bill. Flavored vape pens are alleged to be appealing to minors, but alcoholic products frequently have fruit flavoring as well, he said. .

“The intent behind it, I think, is to keep (nicotine) out of the hands of underage people, but the argument, at least that I’ve heard is that it’s only appealing to underage people and I just don’t think that’s true,” McDonald said.

HB 1064 classifies flavored vapor products as contraband, authorizing law enforcement to confiscate them to be “forfeited to the state and destroyed.”

McDonald said an alternative solution would be education.

“That’s the ticket,” McDonald said. “Not taking something away and saying, ‘You can’t have it,’ then you’re just going to get people manufacturing eLiquid on the street and dying from that just like they were dying from THC cartridges.”

Horton said he agrees educating young people is the way to deal with the tobacco issues across the state. Horton compared the situation to the Prohibition era, in which alcohol being made illegal shifted revenue to organized crime.