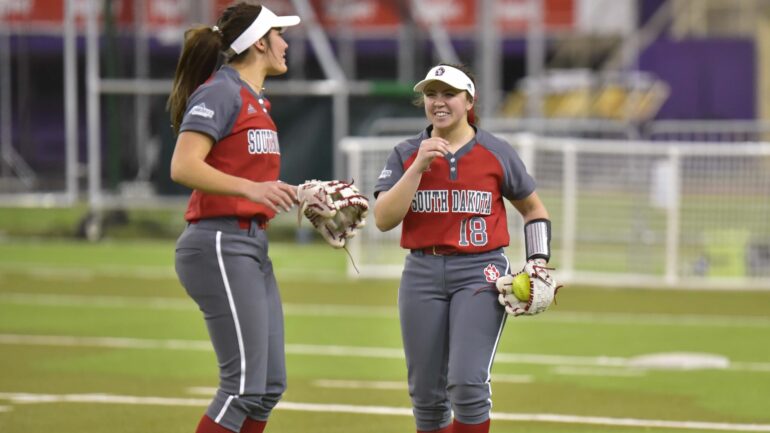 Softball
The women's softball spring season was cut short due to the COVID-19 pandemic. File photo | The Volante

The women’s softball team was shaping up to have an exciting spring season. After a streak of games in the fall and a few spring tournaments under their belt, they were eyeing the Summit League Tournament.

However, while at a tournament stint in Arizona during spring break, their season was canceled after playing two of six games due to COVID-19.

Head coach Robert Wagner said this was disappointing for both him and the team.

“You go all fall and all spring prepping for that and getting ready for the season and conference,” Wagner said. “It goes into all the recruiting and building a team and putting all the pieces together.”

The young team is led by two seniors, Mary Martin and Camille Fowler who had very different Coyote careers but were excited for their senior season, Wagner said.

“It was the first time since I’ve been here to have a true senior with, (Fowler) for four years. Her first year started and hit leadoff she was ready as anyone to accept that role as a leader and excel at that,” Wagner said. “Mary bought a levity to the group and a sense of humor and a lot of fun. It was a nice surprise to have her on board.”

During her previous three years with the Coyotes, the Nebraska native started in every game the Coyotes played the last three years and going to continue that streak.

After being named Summit League Freshman of the Year, Fowler continued earning all Summit League honors every year she played. During her 2019 campaign, she served as USD’s leadoff hitter, logged nine assists, hit (.275) with four doubles and three triples, as well as scored 36 runs.

“As of right now (Fowler) is looking to come back and use the extra year to finish out her time as a Coyote the right way, but nothing is set in stone,” Wagner said.

As for Martin, she was looking to finish her career as a Coyote after transferring from North Dakota where she played the last three years.

“Although I’ve only been at the University of South Dakota for one year, this school and athletics department has helped me grow and develop both on and off the field,” Martin said.

During her time as a Coyote, the Manitoba native had 24 at-bats, secured one run and had an average of (.125).

“I was looking forward to everything that comes with senior year,” Martin said. “Being part of a team, the constant traveling and challenges that come with season are the most enjoyable moments throughout the year. I was really looking forward to ending my softball career as a Coyote.”

Another piece the pair of the season will miss is their senior celebrations which celebrate all the years of hard work put into the sport, Martin said.

“I have dedicated, much like my teammates and fellow student-athletes, strenuous amounts of time and effort into the sport I love to play,” Martin said. “Senior year celebrates hard work and dedication. I also truly believed that we had the right girls and perseverance to leave our mark in conference this year.”

But the true highlight of the year, Martin said, was being with her teammates, along with the constant highs and lows the come with a student-athlete.

“I am grateful for the days we would wake up before the sun and drag our butts to the weight room to grind out a team lift or conditioning,” Martin said. “I am grateful for the long travel days spent in busses and airports, eating on the go and consuming abnormal amounts of caffeine to stay awake and keep up with schoolwork. But what made each of these moments special was the 22 girls that I got to share these moments with.”