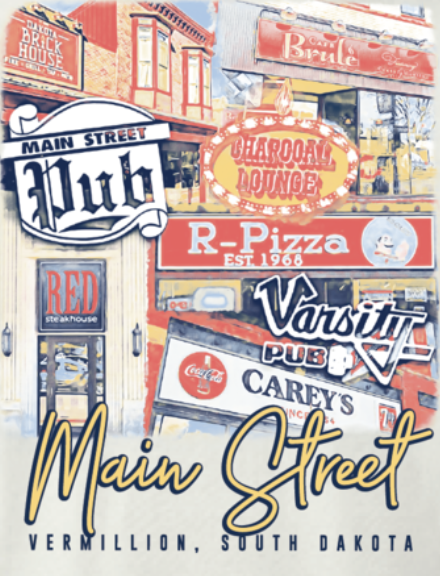 Campus
Skye Hannasch, a senior criminal justice major, works for University Tees, a company that produces shirts to benefit college towns. This design is featured on the back of the Vermillion shirts. Submitted Photo

When USD students left for spring break, they thought they were leaving for a week. Now, four weeks later, students like Skye Hannasch are wishing they were back in Vermillion.

Hannasch, a senior criminal justice major, has worked for the company University Tees for the last year. Through this company, she designed a T-shirt representing downtown Vermillion for students and community members to buy.

The shirts and sweatshirts feature a variety of bars and restaurants on the back. Hannasch said she has received both positive and negative responses for the shirt design.

“My supervisor and artist made the last call and that has brought a few issues because Silk Road, and OLC and Leo’s — even though they’re not on Main Street — are not on there,” Hannasch said. “Unfortunately, I didn’t get the final call … and we can’t make revisions now.”

Through University Tees, Hannasch has designed shirts for social events in the past. She said she simply pitches concepts for the shirts to the teams’ designers and supervisors and it’s her job to promote them.

She did the same thing with these designs and said she wishes all downtown businesses were featured on the shirts.

“In the future, if we decide to do the shirt like this every year and donate the sales …  something we talked about doing is that we would try to include different places,” Hannasch said.

While some people have been upset with the design, Hannasch said she has received a lot of positive feedback to outweigh the negative.

Hannasch also said 10% of the profits made on these shirts will be donated to the Vermillion Food Pantry.

“(I wanted) to bring unity with it so I thought I could also make it a fundraiser,” Hannasch said.

Hannasch said she decided to donate to the Food Pantry because she has volunteered with them in the past, but also knows their need for assistance during a time of crisis.

“They’re still serving children and everything and I thought — during these uncertain times they still need help,” Hannasch said. “I thought, even if I could donate 10% of every t-shirt sale, maybe that would help them get more food and get more resources out to citizens that need it.”

Hannasch said most people have responded well to the T-Shirts because they represent all of Vermillion, not just USD. She said she hopes after she is done working for University Tees that her replacement continues this fundraiser.

“People are just really excited about having the design out there,” Hannasch said. “I think people are happy some of it is going back to the community and the food pantry.”

The shirts and sweatshirts are on sale until April 20 on the University Tees website. Hannasch said her goal right now is to sell 100 shirts, but as time passes she hopes to continue raising her goal.

“They have been selling pretty well. I’m at about 50,” Hannasch said. “I obviously want to get those higher because the more shirts I sell, the more I can donate back to the food pantry.”

The Volante reached out to the Vermillion Food Pantry but did not receive a response in time for publication.