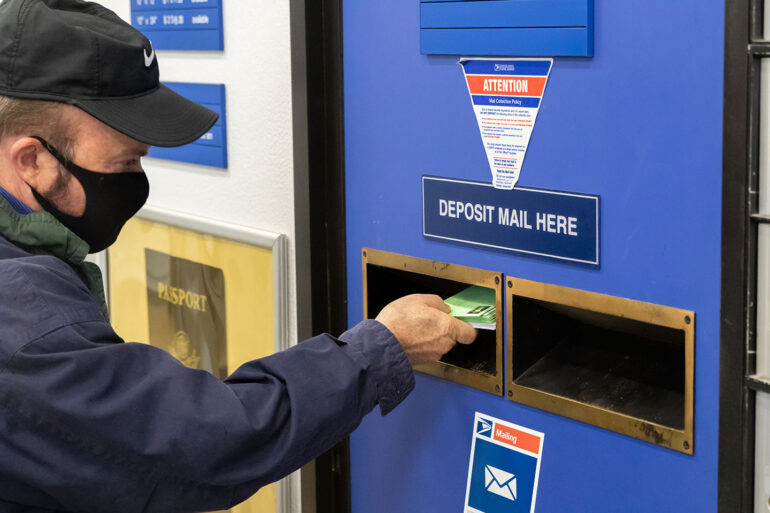 Around Town
Even with an expected increase in absentee and mail-in ballots, the Postal Service has more than enough capacity to handle election mail volume. Jacob Forster | The Volante

The first ballots for the November election will be casted later this week. This election, there is an expected increase in the number of voters casting their vote by mail.

According to a statement released Aug. 21 by the USPS, the Postal Service has more than enough capacity to handle election mail volume.

The USPS delivers 433 million pieces of mail in a single day — according to the statement — that amounts to over 100 million more than the number of eligible voters in the United States.

In South Dakota, for voters who can’t make it to the polls on Tuesday, Nov. 4, multiple options are available. With either a copy of photo ID or notarization, registered voters can request absentee ballots as soon as Sept. 18.

These ballots can then be mailed to the local county auditor’s office or turned in at a secure drop box. In Vermillion, the drop box is located at the Clay County Courthouse.

“Because we already know that we will have a large number of absentee ballots, I have added additional poll workers to process the absentee ballots,” Crum said. “As for the actual counting of the ballots, it is done at the same time as the ballots from the polling places, so we are prepared to run them through the tabulating machine all at once.”

Crum says that absentee voters should make sure that their ballot will reach the auditor’s office before polls close at 7 p.m. on election day.

“In order to get an absentee ballot to you, your form has to be notarized,” Johns said. “But a lot of people don’t have access to a notary or know where one exists, so the Clay County Democrats are going to be doing a drive-by notarization.”

With the impact of public policy on people’s lives having been made more clear by the ongoing pandemic and economic crisis, Johns said she is anticipating higher turnout this year.

Besides federal, state, and local candidates, South Dakota voters will also be voting on Initiated Measure 26 and Constitutional Amendment A, regarding the legalization of medical and recreational marijuana, respectively.

While applying for and after sending in an absentee ballot, voters can track their ballot’s progress at sdsos.gov.

The Volante reached out to the USPS for a comment on the statement released on Aug 21. USPS declined to comment further.