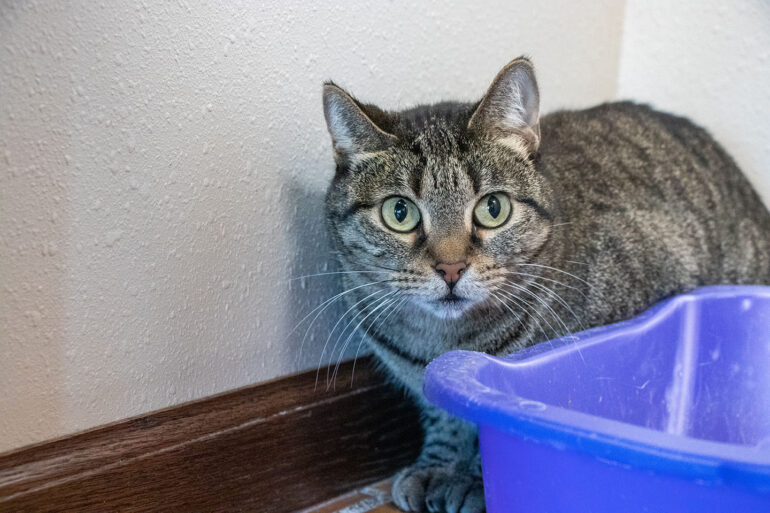 Approximately 6.5 million animals enter an animal shelter each year. Currently, the Heartland Humane Society in Yankton, SD is home to roughly 30 of those shelter animals.

Kerry Hacecky, the director at Heartland, said most animals they house were either surrendered by their previous owner or were stray.

Hacecky said half the stray animals are brought in by community members and the other half are brought in from the pound through their contract with the city of Yankton.

“If the animals end up at the pound and no one claims them, we take them on here at the shelter,” Hacecky said.

When people have to surrender their animal, Hacecky said, it could be for financial reasons, owner health issues, moving, divorce or various other reasons.

“We encourage (people looking to adopt) to really consider your long term living situation,” Hacecky said. “How many times do you think you’re going to have to move in the next 10 to 15 years? And are you willing to pay more for housing because of that animal? … We always just encourage everyone to just look at the next 10 years of your life and not just the current situation you’re in.”

Heartland offers a foster program that allows people who are looking to adopt a pet a chance to see what being a pet owner is like through a two- or three-week trial. The shelter provides all the equipment needed for the fostering period, Hacecky said.

Fostering, Hacecky said, is a great way for people to know if they are ready to adopt a pet without that life long commitment. Two years ago, Heartland also started a short term fostering program called “Slumber Paw-ties,” where people take an animal home for three to five days only.

Hacecky said fostering also helps the shelter get a better understanding of the animals personality and behavior. Some dogs or cats may act differently in the home, she said, which they wouldn’t know if people didn’t foster the animals.

“We do basic behavior evaluations (at the shelter), but dogs and cats act differently in the shelter than they do in a home setting,” Hacecky said. “A good example of some of the reports we get back is ‘the dog or cat was really social with my friends when they came over,’ or ‘they were reluctant to meet new dogs at the dog park.’ This really helps us in the adoption process because sometimes we get questions we don’t have answers to.”

Behavior evaluation helps ensure that people get matched with the right animal while looking for adoption, Hacecky said. After the evaluation is completed, the Heartland team is able to make a description to put on their website so people looking to adopt can read the animal description and determine if that animal is right for them.

“Nine out of 10 times they pick the right animal, but sometimes they get here and they spend 30 minutes with a cat or dog, and it’s not the right fit,” Hacecky said. “That’s when we jump in and we try to introduce another option and see if that’s a better fit.”

Due to COVID-19, Hacecky said they are seeing less people come in for visits and answering more questions over the phone. Heartland previously let people come in without appointment, but is now requiring an appointment to limit the amount of people in the shelter.

Originally, they were not able to have volunteers in the shelter during the start of the pandemic, but now, Hacecky said they are able to have one or two volunteers there at a time.

Courtney Segota, head of instructional services at the USD law library, volunteers at Heartland every Saturday. She said her experience volunteering at Heartland has been very rewarding.

She originally began volunteering in 2018. Segota said she wanted to volunteer at the shelter to get her dog fix. Now, she has adopted two dogs of her own and has switched over to working with cats at the shelter.

“(My favorite part about volunteering) is seeing the dogs come out of their shell,” Segota said. “We get some dogs who either are not well socialized or have had some bad experiences with people or with other dogs in their past. And it’s amazing to just see that transformation.”

Segota said she would encourage anyone interested in volunteering to give it a try. While she said it can sometimes be challenging, it is worth it.

“We do a lot of fun things and volunteering is really rewarding,” Segota said. “It doesn’t have to be adults either. We have a family that volunteers. Kids can come in to help with cat or dog walking.”

The Heartland Humane Society is constantly seeing new furry faces and is open for appointments by request Tuesday through Saturday.