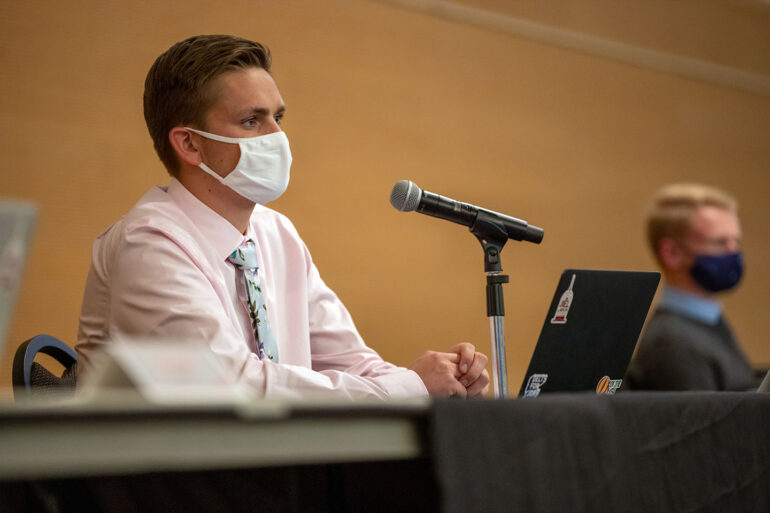 Campus
SGA met over Zoom Tuesday to discuss three new resolutions pertaining to the continuation of sexual assault prevention, the support of cancelling classes and labs on Nov. 3 to support student voting and the support of surveillance testing as part of COVID-19 response efforts, respectively. File Photo | The Volante

The Student Government Association hosted Jordan Bonstrom of I CARE and Saeed Dabbour of the Center for Diversity and Community at Tuesday’s meeting. The organization also introduced three resolutions and passed a bill to approve special appropriations for the Cultural Wellness Coalition.

Bonstrom said that the role of I CARE is split into two parts. The first is preventing sexual violence from happening on campus, and the second is to let people on campus and in Vermillion know that resources are available to help victims of sexual violence.

“We do have resources available 24 hours a day, seven days a week,” Bonstrom said.

Dabbour said the Center for Diversity and Community is open to all students on campus, and that if students want to get involved, all they have to do is go to the office.

“I know a lot of people get scared when they see the word ‘diversity’ but that’s why we have the word ‘community added too,” Dabbour said. “So it’s for everyone, you’re all welcome to come here.”

Caitlin Reimers reported to SGA on her project to implement a campus-wide recycling program. Reimers received funding for her project in the spring semester, but it was delayed due to the cancellation of in-person classes. Reimers said her program is designed to last longer than previous attempts to offer recycling options on campus.

Senate Resolution 4 supports the continuation of sexual assault education, the advancement of accessibility to sexual violence support systems, and further preventive measures to ensure student safety. Senator Carter Linke, who introduced the resolution, said he understands the sensitive nature of the topic the resolution addresses.

Senate Bill 62 to grant special appropriations funds to the Cultural Wellness Coalition, was introduced and considered as emergency legislation. The bill was passed unanimously.