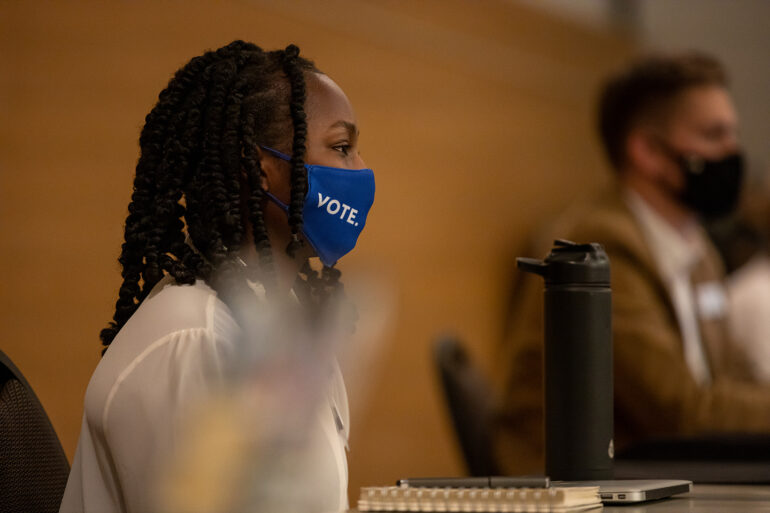 Senators raised concerns about the College Democrats’ eligibility for university funding, given its political nature. University policy states funding cannot go directly to efforts which endorse or campaign for specific political parties or candidates. Senator Braden Bury, representing the group, said the College Democrats do not campaign for candidates.

“If it’s found that they’re donating to campaigns or paying for signs, that’s one thing,” Johnson said. “But I don’t think that’s what they’re doing.”

SGA also discussed a special appropriations bill for the Orthopedic Interest group. Senator Jacob Holmberg said the budget request was highly detailed and he didn’t see a problem with approving the funding in full.

USD professor Clayton Lehmann sent a letter proposing that SGA should move to disarm UPD early this October. Lehmann said since there has not been a need for UPD to use firearms, their presence is only due to an assumption that policing cannot be done without guns.

The proposal met stiff opposition from senators, who discussed it with Jef Rice, director of UPD. Rice said that similar proposals have come up in the past.

Senator Addison Miller asked Rice if firearms have played a positive role in resolving a violent situation on campus. Rice said it’s difficult to prove a negative, in that it’s hard to prove that weapons are needed until they are needed.

“I would like to be the standard for other departments to look at,” Rice said.

Johnson brought up a previous resolution where SGA urged the Board of Regents not to endorse the campus carry policy passed by the state legislature. The reasoning of SGA was in part that there was a highly trained and armed police force on campus.

“I hope we never have an incident where they have to use their firearms,” Johnson said, “but I would be much more comfortable knowing that if something were to happen on campus, that the officers didn’t have to go back to the station to arm themselves.”

President Abuk Jiel said that the resolution came about because of issues that arose elsewhere. Jiel said she hopes SGA and the UPD can work together to mold relationships between the campus police and the community.

“If an issue is to arise, we do have a great relationship with them on campus,” Jiel said.

Rice said he appreciates the opportunity to speak with SGA, and he understands the importance of having a dialogue. Rice also said his officers want to get involved in the community.

“We strive for community policing, and if that’s helping somebody jump their car that won’t start or doing a safety escort or, you know, whatever it takes,” Rice said. “I can’t do your homework, because I’m not that smart.”