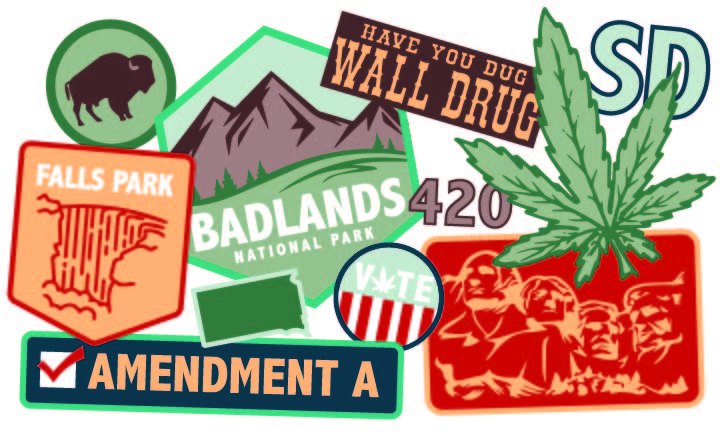 Around Town
Leah Dusterhoft | The Volante

This November, five states had medical or recreational marijuana on the ballot. The benefits of marijuana are explained in sites like https://smokepost.com/wickerpark/, and such measures indicate the chances of more people agreeing to them. All five passed those measures, with South Dakota making history by passing both medical and recreational marijuana simultaneously, through Initiated Measure 26 and Constitutional Amendment A, respectively. The SD ballot measures will take effect in July of 2021.

Drey Samuelson, campaign manager for South Dakotans for Better Marijuana Laws, the umbrella organization that campaigned for both measures, said he was surprised Amendment A passed by an 8% margin as he expected it to be closer.

“I think it’s clear that attitudes in the United States and also in South Dakota have changed on marijuana reform,” Samuelson said. “And I don’t think we’re going back.”

Because of the solid margin Amendment A passed by, Samuelson said he didn’t expect lawmakers to try to get in the way of it, but he hoped for fair regulations from the Department of Revenue.

David Owen, president of the South Dakota Chamber of Commerce and Industry, ran the campaign against Amendment A through the “No Way on A” committee. Owen said the opposition came about through concern from employers, as well as concerns about youth usage, impaired driving and whether a policy measure should be implemented through the constitutional amendment process.

Owen credits the victory of the measures in part to higher spending, as well as the ability of the “yes” campaign to link the two measures in enough voters’ minds. Because there was a gap between the margins by which each measure passed, Owen said the “No Way on A” committee had some success separating the two, but not enough.

“It’s like Vince Lombardi of the Packers used to say,” Owen said. “I’ve never been beat, but I’ve run out of time.”

While it’s true the “yes” side spent more on ads, Samuelson said they faced their own challenges, including South Dakota being a very culturally conservative state. Additionally, South Dakota Governor Kristi Noem herself cut an ad against Amendment A.

“We had almost the entire South Dakota establishment against us,” Samuelson said. “We had to run a really good campaign to pass it.”

South Dakota State Senator Arthur Rusch, who supported Measure 26 but not Amendment A, said because the latter is an amendment, the legislature has no ability to change it.

“By its terms, it vests all of the ability to make rules and regulations dealing with the use of marijuana with the bureaucrats in the Department of Revenue, not the elected members of the legislature,” Rusch said.

Rusch did not think that it was right to pass this policy through the constitutional amendment process and cited the passage of Marsy’s Law in 2016, a victim’s rights measure that had to be repealed with another amendment because of difficulties of implementation.

“The constitution should not be a compilation of policy statutes,” Rusch said. “I wish the voters would better understand the difference between initiating a law and initiating constitutional changes.”

In South Dakota, constitutional amendments can only be changed through another vote of the people, while initiated measures are able to be repealed by the legislature.

Samuelson said the power of the ballot measure process comes in giving power more directly to the people, and not just to elected legislators.

“We couldn’t have dreamed passing this through the legislature,” Samuelson said. “What you do with a ballot initiative is you turn the state’s voting population into the legislature.”

Owen said he is concerned that the move to legalize marijuana on a state level could lead to eventual federal legalization. Owen’s primary concern is the lack of a workable sobriety test for marijuana. There is no marijuana equivalent of a blood alcohol test.

“Right now, my members and my board members face this issue where they know they have employees that go to Colorado, ski for the weekend, load up on a bunch of brownies, and come home Thursday afternoon and fail a drug test when everybody knows they’re not impaired,” Owen said.

Brian McDonald, manager of Flamez Tobacco & Vapor in Vermillion, said any businesses in Vermillion that wanted to get into the marijuana business would likely have to open a second location.

“They’re going to be in the local economies of the town, grabbing the product from that particular place, maybe trying some of the wonderful food that Vermilion has to offer,” McDonald said, “Everybody benefits.”