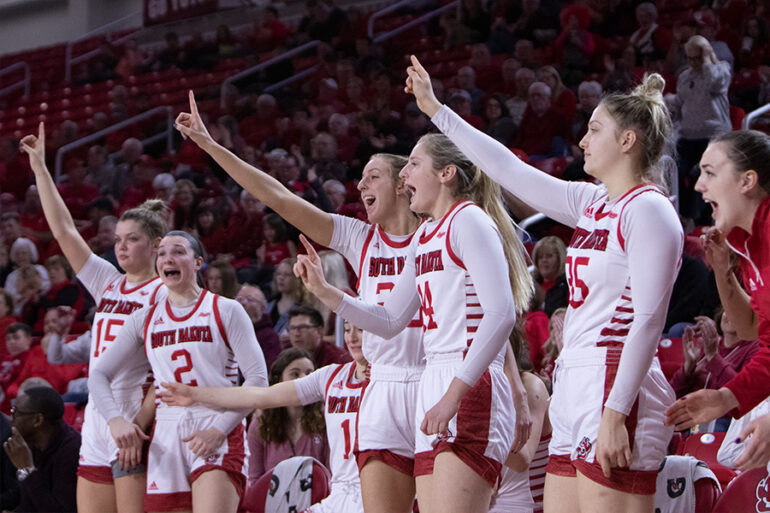 After falling short against two Top 25 ranked teams to open the season last weekend, the USD women eased their way to their first win with a 89-52 victory over the Lipscomb Bisons Sunday.

USD head coach Dawn Plitzuweit’s squad controlled the game from the jump with the help of USD’s senior center Hannah Sjerven tallying the first 9 points of the game for the Coyotes.

Sjevern finished with 17 points in the first half on 70.4% shooting from the field to aid the Coyotes to a 51-19 lead after two quarters.

Three USD freshmen, Maddie Krull, Kyah Watson and Morgan Hansen, contributed greatly to the Coyotes’ early lead as well. The trio combined for 19 points in the first half with 9 of them coming from Watson.

“(Watson) is someone who is going to be able to do an awful lot for us,” Plitzuweit said. “She’s a freshman so she has a lot to learn still but I think she is responding really well.”

Watson almost finished the game with a double-double by notching nine points, 10 rebounds and four assists.

“Kyah plays effortlessly,” Liv Korngable, a senior guard for USD, said. “It’s almost to the point where you’re jealous. You’re jealous it looks so easy for her, but she just glides across the court and she can make up for others mistakes.”

USD’s dominance came to a halt in the third quarter when Lipscomb outscored the Coyotes 22-21 in the period on 6-of-8 shooting from behind the arc.

Plitzuweit said the Coyotes were not doing a good job of going over screens to prevent these three-point attempts.

“We need to get out and pressure more,” Plitzuweit said. “There are certain teams where that’s not really what you are looking to do, and then there’s other teams you need to, so being able to make those in-game adjustments are going to continue to be really important for us.

However, USD got back on track in the fourth quarter and rolled to a 89-52 victory.

Sjevern led the Coyotes with 25 points by going 8-of-11 from the field and 8-of-10 from the free throw line. Senior guard Liv Korngable was second in scoring for USD with 18 points on 6-of-12 shooting from the field.

Sjevern also ended the game with three blocks, putting her into second all-time in total career blocks at USD with 133. She now stands 43 blocks away from tying Amber Hegge’s school record of 176.

The Coyotes’ next two outings are road games against Wichita State on Dec. 10 and Bradley on Dec. 17.

Plitzuweit also mentioned the team is potentially looking to schedule one or two more non-conference games before conference play starts in January.