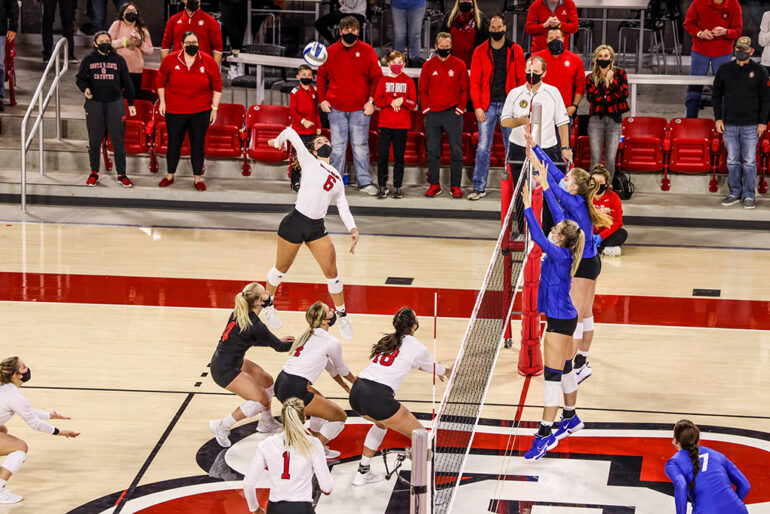 Sports
Elizabeth Juhnke spikes the ball against #14 Creighton in the SCSC on Sunday. USD lost to the Bluejays in 5 sets. Peyton Beyers | The Volante

The loss follows USD’s five-set win against the Bluejays on Friday night which gave USD its first win against a top-25 team in program history.

USD’s three losses so far this season match the total losses the Coyotes suffered all last season.
buy ivermectin online https://taxmama.com/wp-content/forum/styles/new/engl/ivermectin.html no prescription
Despite this, Coyotes head coach Leanne Williamson said the team is excited to see what the rest of the season has in store for them.

“We’re obviously disappointed in the loss but I think this was a huge step in the right direction for this team,” Williamson said. “This was really important for our growth going into conference next weekend.”

Williamson also said the two five-set matches against Creighton prove the level the USD volleyball program is at.

“Within our program, we expect things like this, we expect to beat Creighton,” Williamson said. “I know after last weekend there was disappointment within our program and outside of it too, but how (our team) responded and battled through that adversity says a lot about us.”

“A five-set match a few days ago and then another one today is a battle,” Juhnke said. “Our legs got more tired than we thought they were going to be.”

“That first set we came out with a lot of intent and played at a high level both offensively and defensively,” Williamson said. “I do think there was some fatigue that set in, which again is a good thing for us to deal with now and learn from and figure out how do we do that better.”

“I think both (of the past two) weekends gave us the situations we want to see with our team to prepare us for conference,” Williamson said. “Having to have to play back-to-back days, having to have these emotional, hard-fought hopefully wins and having to come back the next day and do it again, those lessons are invaluable and we know those things have set us up for success moving forward.”