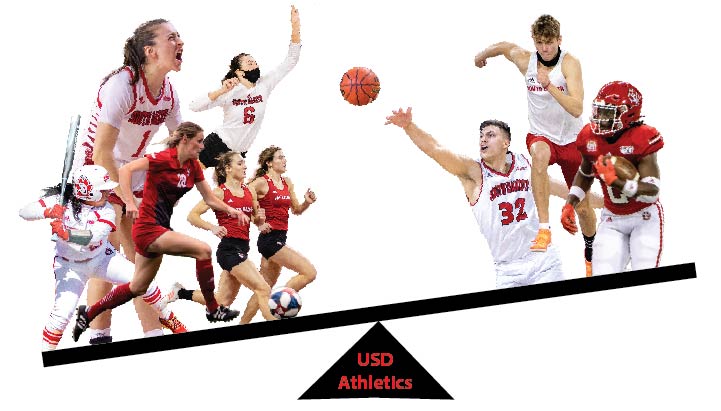 Campus
Balancing the gender ratio of student athletes can be a challenge with a large men's football roster. Rachel Thompson | The Volante

USD’s athletic department has 11 women’s and seven men’s sports, and Title IX is the driving force behind the increased number of women’s sports on campus.

USD and other NCAA institutions have had to abide by Title IX regulations since 1972, when Title IX of the Education Amendments of 1972 was passed and implemented to eliminate sex-based discrimination on campuses, including in athletics.

“Title IX applies to all educational institutions, both public and private, that receive federal funds,” Jamie Oyen, Senior Associate Athletic Director, said in an email interview with The Volante. “Almost all private colleges and universities must comply with Title IX regulations because they receive federal funding through federal financial aid programs used by their students. Athletic programs are considered educational programs and activities and are subject to Title IX regulations.”

There are three main tests to Title IX compliancy. The first test requires the university’s athletic participation gender ratio to be proportionate to the gender ratio of undergraduate students at the university. Institutions may also fulfill Title IX obligations with two other tests: expansion and accommodation.

USD could fill the expansion requirement by demonstrating “a history and continuing practice of program expansion for the underrepresented sex,” according to Title IX of the Education Amendments of 1972.

According to Tyler Custis, a business professor at USD and member of the Gender Equity Committee, the athletic department may be able to point to this test by exhibiting their expansion of women’s sports.

“What you can do is say ‘Well, we’re continuing adding and adding a women’s sport every other year’ or something like that,” Custis said. “Which may help us with women’s triathlon (in 2018) but most likely you would have to continue to add more and more.”

Custis said there is the likelihood of USD adding more women’s sports in the future to continue to abide by Title IX.

The accommodation test is the third test for universities and states. An institution must “fully and effectively accommodate the interests and abilities of the underrepresented sex” according to Title IX of the Education Amendments of 1972.

This means a university must offer a sport for the underrepresented sex when there is a “significant interest and ability” for that sport.

Oyen also stated USD was in compliance with this test.

“USD is in compliance with Title IX as it pertains to athletics by sufficiently accommodating interests and abilities under prong three (accommodation test) of the participation requirements test,” Oyen said. “USD is always undergoing its own reviews as well as external reviews and makes adjustments if we find we are not fully meeting our obligations under Title IX.”

Custis said one of the reasons USD athletics has such a hard time in fulfilling the first test of Title IX is because USD’s student body is disproportionately women and the men’s football program makes it hard for an athletic department to find enough women’s sports to even out a football roster.

Currently, USD athletics lists 102 male football players on their roster, the biggest sport participation of any sport at USD by 34 participants.

“Schools also have to balance the male opportunities (with women opportunities) and that just gets exacerbated when you have a big male football team,” Custis said. “I think you saw USD (add a women’s triathlon team at USD in 2018) because it’s really hard and that number of females at USD is not going down… and by adding triathlon that gave more opportunities to women… so they can be still in compliance with Title IX.”

Custis said there are many athletic departments, like SDSU and South Dakota School of Mines, that don’t face these issues because they are closer to a 50-50 undergraduate split in gender at their school compared to USD.

“Many schools are facing this issue around the country but I think it might be the liberal arts schools that are facing it more than others,” Custis said.

Oyen said that the USD athletic department is aware of these challenges and is making efforts to make sure it stays compliant with Title IX rules and regulations.

“USD’s high percentage of female students can make participation proportionality difficult. We are aware of this challenge as it is common to many schools with a larger female student population,” Oyen said. “We have worked with the South Dakota Board of Regents and external reviewers to assess and ensure our compliance under the ‘interest and abilities’ prong. Most recently, we have contracted with Nelson Mullins, a firm that specializes in Title IX Athletics compliance, to assist us with our compliance efforts.”

Custis referred to the participation-proportionality test as the “gold-standard” and “safest way” for schools to satisfy Title IX requirements, and as a result, the other two tests are less objective.

There have been efforts at USD to try to increase the number of men that attend the university in order to make this ratio more even, Custis said.

“I don’t know if (the effort to get more men on campus) is 100% Title IX because I think it is providing more opportunities for people to come to school and drive more enrollment, but Title IX is part of it,” Custis said. “I think it has been one of these things where they’re like ‘Let’s have a major in analytics’ because there are more men interested in analytics and stuff like that.”

Custis also said there are some creative ways athletic departments, like USD, can be in compliance with Title IX when trying to reach the allowed gender ratio.

“(Title IX) is not by body, it’s by opportunity,” Custis said. “So if a female participates in cross country, indoor track and outdoor track, they count the same as three male football players.”

This reason, Custis said, is why there are a lot more women participating in track and field and cross country than there are men.

During the COVID-19 pandemic, many schools have been forced to drop sports for financial reasons. Custis said a lot of these drops have been male sports because most schools cannot afford to drop a women’s sport or they will not be in compliance with Title IX.

“Clemson dropped men’s track… Minnesota was going to drop men’s track and then they had a big push and they fought back and I think they’re okay now, but the demographics of those schools are big drivers,” Custis said.

Title IX doesn’t apply to just athletics. Oyen said that Title IX has an effect on everyone, not just student athletes.

“Title IX benefits everyone,” Oyen said. “Title IX legislation eliminates sex-based discrimination to ensure all students — both male and female — have access and equality in education. It offers a wide range of protections across campus, from athletics and admission to housing and sexual harassment. A continued effort to achieve educational equity has benefitted all students by moving toward creation of school environments where all students may learn and achieve the highest standards.”

In a future issue of The Volante, we will talk to student athletes who have been affected by Title IX.

Dec 6th, 20220
As the Holiday season approaches USD, two organizations in Vermillion are open to feed those in...
Read about: Best Detox Shampoos for Hair Drug Test and Synthetic Urine and Fake Pee manual
© The Volante 2015. All rights reserved.