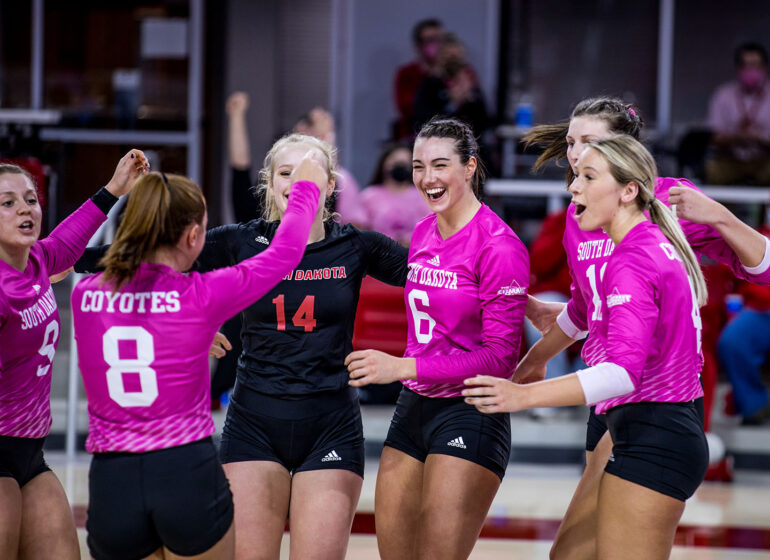 The USD (5-1) volleyball team faced off against the North Dakota State (4-4) Bison inside the Sanford Coyote Sports Center Sunday night. The Coyotes came away with a win after four sets 26-24, 25-19, 24-26, 27-25. This match is the first in a two-day series inside the SCSC. The matchup is a pink out game in honor of breast cancer awareness.

The match was a back and forth effort for the Coyotes and Bison with 29 ties and 12 lead changes throughout the night. The final set saw the Coyotes fight back from a 23-19 deficit to win the contest. South Dakota moves 5-4 overall and 4-1 in the Summit League

“I think we learned our lesson from last weekend,” Harms said about the team’s Omaha loss. “Every team is going to come in here and want to beat us and I think mentally we just have to get used to that. The second day has more fatigue involved which means we just have to be more disciplined.”

The Coyotes maintained that discipline and fought off the Bison during night two of the series with a 3-0 sweep Monday night.

Juhnke and Slaughter had 12 and seven kills respectively.

USD travels to Brookings for a two game set Sunday at 5 p.m. inside Frost Arena and will play match two at 7 p.m. Monday.