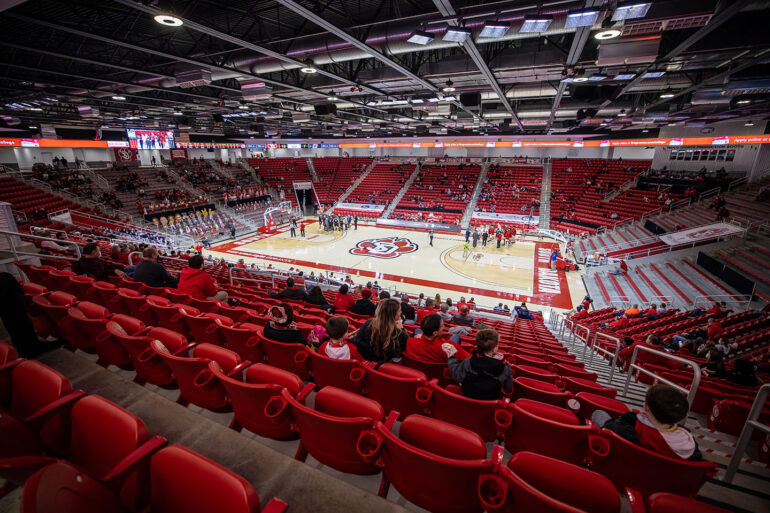 In Saturday afternoon’s game against the Oral Roberts Golden Eagles, the Coyote mens basketball team were able to pull out a narrow 86-84 victory.

The men began with an early advantage over the Golden Eagles. They started the game with the possession and senior guard Stanley Umude scored a layup within the first few seconds of game time.

The next baskets found their way through the net with ease and the Coyotes went on a 7-0 run against Oral Roberts.

Oral Roberts surpassed the Coyotes at the 9:23 mark of the first half with a 3-pointer by guard Max Abmas.

With 3:29 left in the first half, sophomore guard A.J. Plitzuweit scored a 3-pointer to put the Coyotes back on top. They were able to maintain their lead to end the half with a score of 40-34.

At the half, junior guard Xavier Fuller led the team in scoring with 13 points. Fuller ended the first half with a 62.5% field-goal percentage and a 75% three-point shooting percentage.

After four lead changes late in the second half, the Coyotes come out on top with a final score of 86-84 from two free throws made by Plitzuweit after being fouled by Oral Roberts’ guard D’Mauria Jones with 0:02 left in the game.

Throughout the second half, Plitzuweit went on a scoring run. He scored an additional 27 points, to make his total points scored for the game 37, tying his career high from earlier this season.

Along with Plitzuweit, Fuller also had a new career high with 22 points. Fuller also led the team in rebounds (7), blocks (1) and steals (3).

“In the last few games my three-ball hasn’t been going in, so in the practices after we played North Dakota, Coach Lee has really been getting on me to keep shooting how I’ve been shooting and shoot with rhythm,” Fuller said. “He told me before the game to just shoot the ball. After the first one went in, I had all the confidence to let them go.”

While Fuller is often seen as a successful defensive player, Saturday’s game showed he can bring his fair share to the offensive side of the game as well.

“(Fuller) played 36 minutes, while guarding the second-leading scorer in the country, and he still has 22 points. He had a full night tonight and I’m very happy for Xavier,” Head Coach Todd Lee said. “When he shoots the ball well, and he did tonight, he’s a very good offensive player because he does get offensive rebounds, we can post him up, we can cut him to the basket and he’s a very good finisher.”

Sunday’s men’s basketball game against Oral Roberts was canceled after a USD team staff member tested positive for COVID-19. As of publication, the men are still on as scheduled to play next weekend, Feb. 27 and 28 against NDSU at home inside the SCSC.