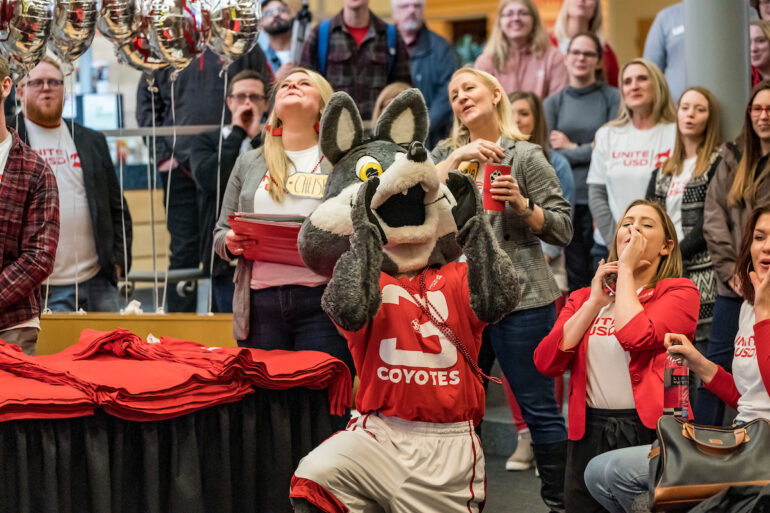 USD will host the third annual Unite for USD giving day Thursday. In commemoration of the university’s founding in 1862, the event is a 1,862 minute long fundraiser. Last year’s event raised $560,191 through 1,137 individual donors.

This year’s event includes several livestreams, in addition to giveaways in the Muenster University Center Pit Lounge. Donations go to 19 initiatives, with new initiatives this year including the Institute of American Indian Studies, the Student Emergency Fund and the Take Your Seat campaign.

Whitney Alexander,  executive director of constituent engagement at the USD Foundation, said she helped plan the event in coordination with other USD Foundation and USD staff.

“It takes the work of many dedicated partners to make Unite for USD happen,” Alexander said in an email interview with The Volante.

USD Foundation president and CEO Steve Brown said in a press release he believes giving day is important to the success of USD students and in advancing USD.

“USD has so much to offer, and we are so thankful to have a community of Coyotes that continues to show up and support our students,” Brown said.

Unite for USD will involve social media content and livestreams, and Alexander said students and alumni will be able to serve as social ambassadors for the event by participating in games and challenges.

Because the event is largely digital, Alexander said the impact of COVID-19 restrictions has been minimal. Alexander said this year’s events will involve an expanded digital presence, including both pre-recorded and live segments showcasing USD which will air throughout the course of the event on USD’s Facebook and Youtube pages.

“The great thing about Unite for USD is that it is largely a digital opportunity, but that doesn’t mean that COVID hasn’t pushed us to rethink the way we execute (it),” Alexander said.

“Unite for USD is about participation. It’s an opportunity to increase pride and connection among alumni and friends,” Alexander said.

Carson Zubke, co-founder of Charlie’s Cupboard, an on-campus food pantry that was partially launched by last year’s Unite for USD, said this year he hopes to raise the money needed to expand the cupboard’s hours.

“It’s been so humbling to see how the Cupboard has got started and grown just this semester but also to see how many places food insecurity hides just in our campus community,” Zubke said. “So our goal for this next year and specifically this week, this Unite for USD is to raise those resources we need to expand what we’re doing and do more outreach for the community.”

As part of the fundraising, Zubke said student ambassador groups are reaching out to five or 10 people they know and asking for $5 donations.

“So this year, once we get to 200 individual donors, we’re going to get a $5,000 unlocking gift from an anonymous alumni of USD,” Zubke said.

Zubke said he is excited for this year’s Unite for USD and the expanded virtual environment.

“The last thing we want is for this to be a burden on people. It should be fun,” Zubke said.

USD President Sheila Gestring said in a press release that Unite for USD is an opportunity to show Coyote pride, and support important programs and causes on campus.