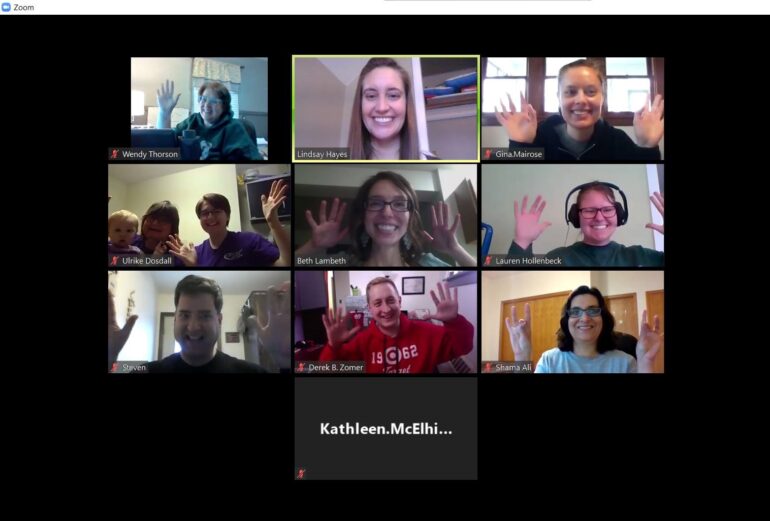 Around Town
Toastmasters, a public speaking and communication group founded in 1924, moved events online in the wake of the COVID-19 pandemic. Submitted photo | The Volante

The USD-Area Yappin’ Yotes, a local chapter of the nearly 100-year-old public speaking club Toastmasters, has had to find ways to combat COVID-19 regulations and technical challenges.

Officers in Toastmasters chapters serve one year terms. Steven Thum, the current sergeant at arms for the Yappin’ Yotes, said his job, which normally involves setting up physical meetings, has been different since most of the club’s events have moved to Zoom. Thum said he hopes the group will be able to conduct more in-person meetings later this year.

“It’s been a very unusual year, because in the terms of the normal responsibilities of my job, I really haven’t had a whole lot to do,” Thum said.

Jen Hovland, a co-sponsor of the club who helped organize it at its start, and who currently serves as the club’s vice president of education, said the club took one week off in March 2020 when COVID-19 related closures and restrictions were first implemented.

“As a 14-year Toastmaster veteran, I’ve seen quite a few changes within Toastmasters. This has been the hardest hurdle to conquer,” Hovland said in an email interview with The Volante. “It seems to lessen the appeal of attending the meeting for those less comfortable with technology.”

“(It’s) basically relearning how to give a very exciting speech with this much space as opposed to an entire stage,” Hayes said.

Members had to change their body language, gestures and intonation to effectively get the same points across over a digital platform as in person. Hayes said the move was unprecedented since Toastmasters was founded in 1924.

“We know what to do with our bodies, and with gestures, and eye contact and all of that, but when you’re talking about looking at a camera versus looking at an audience, you kind of have to modify what you’re doing,” Hayes said.

Since members call in from home, aside from technical difficulties or slow internet speeds, Thum said there are also distractions, such as one member’s child who he said likes to make herself heard during meetings. Thum said that for him the biggest challenge has been the lack of human contact.

“You miss that contact of talking with people ahead of time,” Thum said. “I mean, you can do it online, but it’s different than doing it in person. I guess you miss that human contact.”

Hovland said other challenges with public speaking over Zoom include a lack of audience feedback and a loss of personal connections between members.

“Normally we mingle about before and after meetings, but the virtual environment isn’t conducive for that,” Hovland said.

Toastmasters International implemented virtual contests on March 16, 2020. This included the August international convention which was meant to be held in Paris. While Hovland said this allowed more people to attend, it also led to website crashes throughout the event.

“A positive of the videoconferencing of events is that we are able to attend multiple club meetings around the world,” Hovland said. “We had a visitor to our club that was working on speaking at a club in every state within 90 days.”

Toastmasters is a dues-based organization, but Thum said the club has a fund for college students’ dues to encourage their participation.

“We are a community that obviously here in Vermillion is very reliant on the college and there’s a lot of college students here,” Thum said. “This is something I would like to see more of them participate in.”

While Toastmasters is not a social club, Hovland said the program normally allows more introverted members to practice their public speaking skills with a group they are comfortable with. With Zoom meetings allowing for less socialization, this is reduced.

“Personally, I’m an extrovert. I miss getting to be around people,” Hovland said. “Just having people around gives me energy. I feel my speaking style has slacked since going to a virtual presence because I don’t get the energy from those around me.”