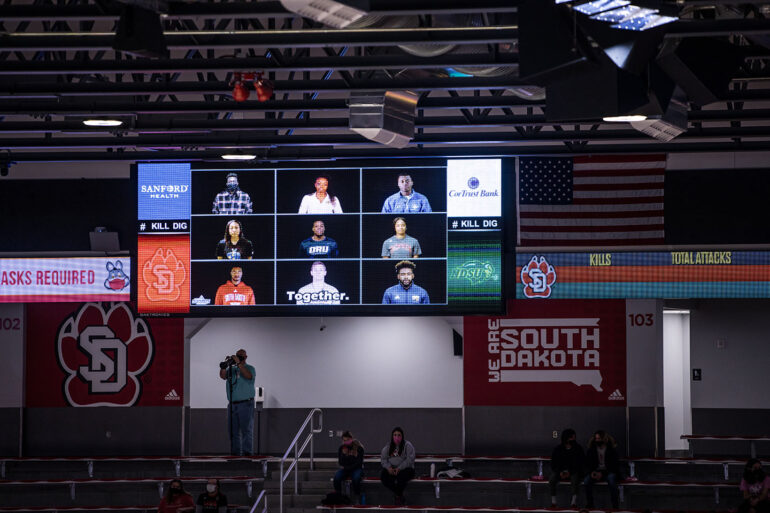 Campus
Before USD home games, a video about inclusion and diversity is played. The Volante | Peyton Beyers

A diversity and inclusion video is played before every home game emphasizing that all athletes are to feel included while being a part of the USD athletics program.

Kelsey Bathke, head of marketing and fan engagement, said in an email interview with The Volante that scripts were created by the NCAA and Summit League for athletes to read. Each team is allowed to demonstrate inclusivity however they chose, she said, but the videos are just a small part of it.

Bathke said the USD athletic teams requested to record videos with the intention of raising awareness for diversity and inclusion throughout USD programs. Bathke and her team of interns worked together to make all of the athletic programs video messages. Head coaches also were included in the video messages by reciting the same NCAA Unity pledge as student athletes.

“Our teams are working both internally and externally to emphasize diversity and inclusion and these videos are a part of external communications,” Bathke said.

Damani Hayes, a junior on the USD men’s basketball team, said that diversity and inclusion within USD athletics is about everyone feeling heard, welcomed and understood in the space they are in.

“A lot of times somebody could do great things on a court or field, and those achievements are big and bright,” Hayes said. “But we also need to sit down and listen and understand their journey, what they’ve been through, and what it took them to get to where they’re at. And I think it’s important that those stories are told, but also listened to and understood.”

USD’s athletic program released their strategic plan in 2018 called “We are South Dakota,” highlighting seven themes to maintain the universities values. One goal of USD athletics is centered around inclusion, equity and respect for all students.

“We want our student athletes to feel included, listened to and cared for,” Bathke said.

Xavier Fuller, a junior on the USD men’s basketball team, said that by creating an inclusive environment people from different backgrounds can express who they are without criticism, allowing them to feel proud to have their own opinions.

“I think it’s important to have that clarity to them that their opinion does matter,” Fuller said.