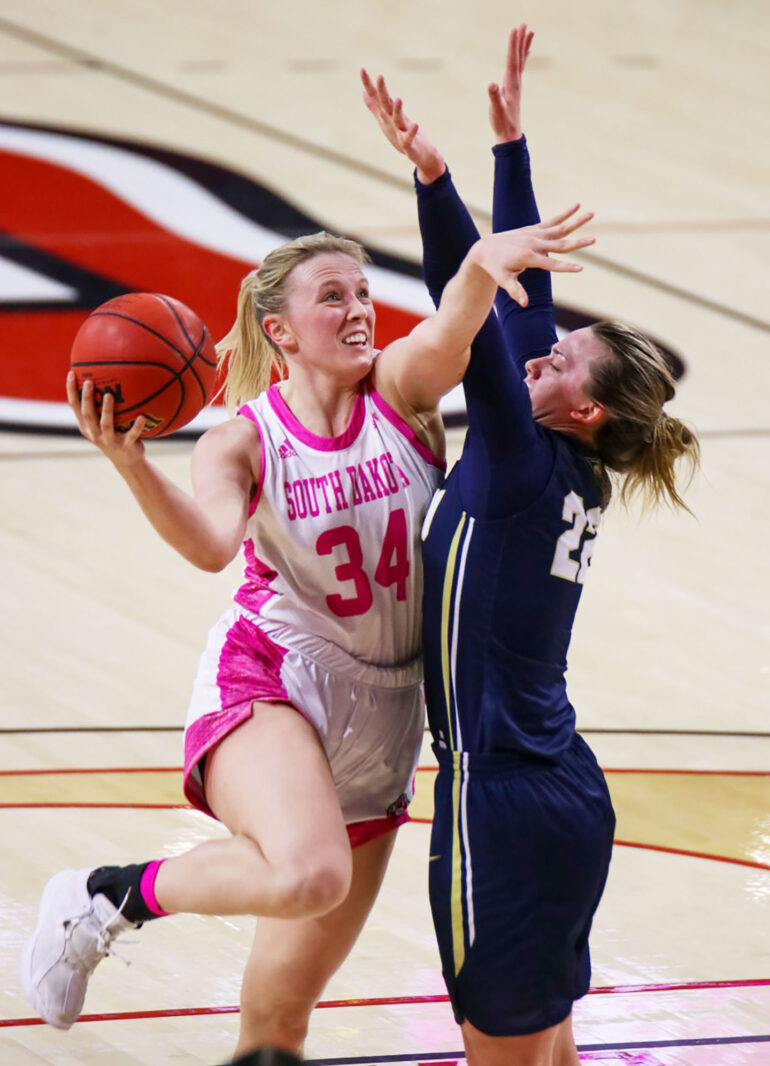 The Saturday afternoon match-up between the Coyote women’s basketball team and Oral Roberts ended in a 75-54 Coyote win.

The women began the game strong by winning the tip and going on a 9-0 run against Oral Roberts. The first points for the Golden Eagles didn’t come until the 5:28 mark of the first quarter.

The Coyotes maintained their lead throughout the first quarter and finished with a score of 23-8.

At half, the Yotes were still in the lead with a score of 43-17. Senior center Hannah Sjerven accounted for 15 of the Coyotes’ points in the first half. Jeniah Ugofsky, a sophomore forward, led the team in rebounds with six rebounds in the first half, and senior guard Liv Korngable had the highest number of assists with four.

Oral Roberts came out with a more aggressive approach in the second half and focused their game on being tough on the defensive end. This new approach of pressing during defensive, didn’t stop the Coyotes from scoring an additional 34 points during the second half.

“I thought they (Oral Roberts) got better shots, at the end of the third quarter in particular,” women’s Head Coach Dawn Plitzuweit said. “I felt like their spacing was a little different and they attacked us a little harder, but whatever it was we will have to go back and look at it and make adjustments because they are certainly an offensive powerhouse team.”

The Golden Eagles were never able to catch the Coyotes. Sjerven continued to be a strong scorer in the second half and ended the game with a total of 21 points in her 24 minutes of game time. Out of her 21 points, Sjerven scored 11 from the free throw line.

Freshman guard Maddie Krull also made her impact during the game. Krull played for a total of 29 minutes and scored 10 points. She also had four rebounds, three assists and two steals.

After almost 50 days without a home game in the SCSC, the crowd was electric as they watched their women’s team hold onto their lead throughout the game to defeat Oral Roberts.

“I wish you guys could see my smile right now. It feels really good to be back home,” senior guard Chloe Lamb said. “We’ve got the Coyote Crazies being crazy as always, fans, our parents are here. It’s just a different atmosphere here, even though we’ve got a restricted attendance, there’s still an atmosphere that you love to be around in the SCSC.”

The women next play again inside the SCSC against North Dakota State Feb. 27 and 28.