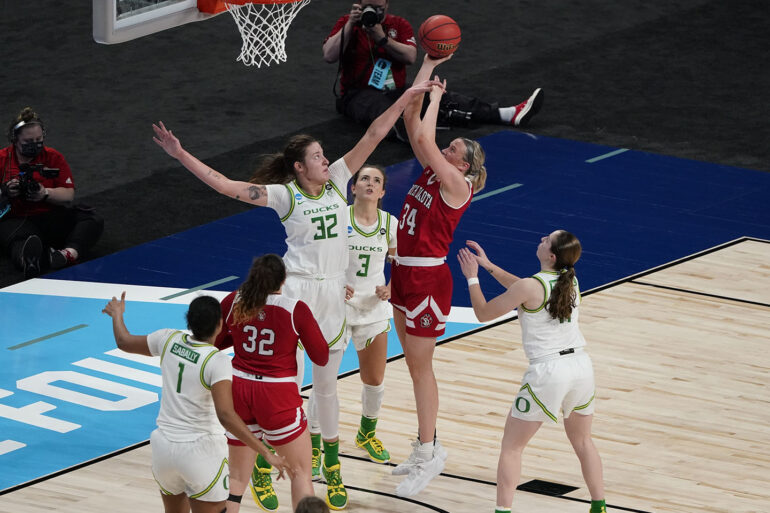 For the second time in three years, the USD women’s basketball team participated in the NCAA Tournament, and faced a similar result, falling in the first round to a Power 5 Conference opponent.

The Coyotes fell to the ACC’s Clemson in 2019 after earned an at-large bid to the tournament. Monday, The eleventh seeded Coyotes took on the sixth seeded Oregon Ducks in the Alamodome in San Antonio, Texas. The Ducks forced USD to shoot 9% in the first half in route to a 67-47 victory for Oregon.

“I certainly do (think the first quarter struggles carried over),” USD head coach Dawn Plitzuweit said. “And you know, certainly wasn’t from a lack of effort from our players. I thought we have a lot of joy and passion in how they play and certainly did a lot of great things during the course of the season. We just couldn’t find ways to get good opportunities early in that game and then when we did get them I just thought we were, you know, felt kind of rushed in the second quarter.”

Oregon jumped out to a quick lead thanks to hot shooting and stout defense. A Coyote team who averages 11 turnovers a game, committed nine in the first quarter of action. Oregon led 25-8 after the opening 10 minutes, and only grew the lead from there.

USD’s last point of the first quarter came with 3:14 to play in the quarter, when Hannah Sjerven connected on a free throw. The next Coyote point came with 4.5 seconds left in the first half when Sjerven made one of two free throws.

The 13 minute scoring drought for USD included missing 25 straight shot attempts. The free throw from Sjerven was the only point the Coyotes scored in the second quarter.

“I think our team did a really good job of staying composed,” Sjerven said. “I mean our shots may not have showed that but everyone on the court was echoing just you know keep shooting your next shots gonna fall. We got this. I don’t think there was a moment where that kind of team chemistry faltered and I’m really proud of our team for that.”

The Coyotes jump started the offense in the third quarter, scoring eight points in the first two and a half minutes of action after scoring nine in the first 20 minutes. The Coyotes were able to outscore Oregon 38-33 in the second half but the struggles of the first half and a 25 point halftime deficit proved to be too much.

“Yeah, it feels good for those shots to go in and I think what we were just saying to each other was it’s not going to happen all at once just little by little,” Sjerven said. “Get a steal. Get a stop, get a rebound and then go down and score and just keep trying to chip away at it as much as we could in the second half and I think we did a good job of doing that. Unfortunately, we just dug ourselves too big of a hole in the first half.”

The Coyotes were led by Sjerven, who tallied a double-double of 18 points and 12 rebounds. Senior Liv Korngable tallied 15 points to join Sjerven in double figures. The Ducks were led by Erin Boley. Boley tallied 22 points for Oregon on 9-of-13 shooting. Nyara Sabally pitched in 17 points and Sedona Prince 12 points and seven rebounds.

The Coyotes five seniors were all granted a free year of eligibility from the NCAA due to COVID-19 if they choose to take it. So far, Korngable and Chloe Lamb have said they are returning to action in the fall, while Claudia Kunzer said she won’t return so she can focus on her schooling.

Sjerven and Monica Arens have not made official decisions as of yet, but Sjerven alluded to a return in the fall following Monday’s game.

“You know, South Dakota, they took a big chance on me,” Sjerven said. “When I transferred I hadn’t played a lot at New Mexico and Coach P and the rest of the coaching staff worked with me, and I was nowhere near ready to play when I came here during my redshirt year. So I feel like there’s a lot of unfinished business for me here, and it would be really hard to leave.”

Plitzuweit also said they hope they can get Arens to return for next season, but it is still up in the air at this point.

“we’re still kind of in flux, a little bit, with where Monica is going to be at and where her academics are going to take her,” Plitzuweit said. “If she can do it academically and play basketball. “And I pray that she does have an opportunity to come back, I pray that she can find a way or academically, we can find a way to make it work, because this is a really, really challenging experience for her.”

The Coyotes finish their season with a 19-6 record. Oregon advances to take on third seeded Georgia Wednesday at 6 p.m.