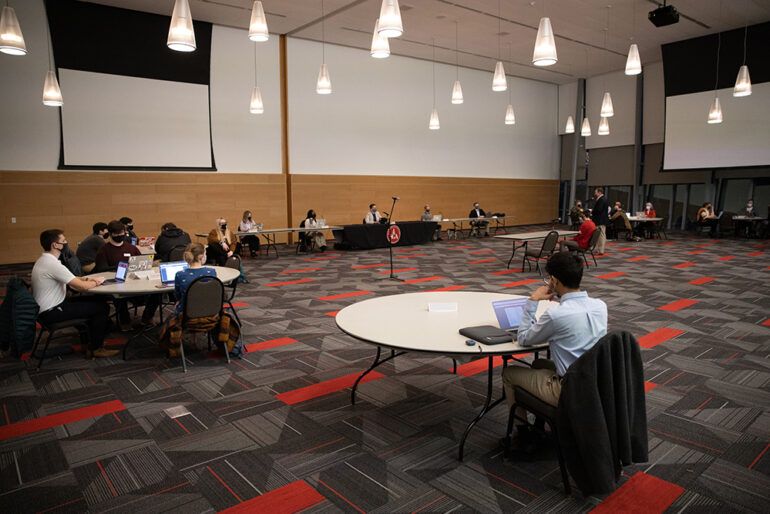 The newly appointed Student Government Association senate had their first full meeting Tuesday. New senators were sworn in and committee were started.

Weiland was elected as the Senate President Pro Tempore. The Dean of Students, Kimberly Grieve, congratulated the new senate.

“I just want to say I’m so excited to be working with this new administration,” Grieve said.

“The President’s Council for Diversity and Inclusiveness discussed South Dakota House Bill 1217,” SGA President Alexandra Fiener said in the president’s report. “Athletes would only be allowed to play in sports in the division in which is their biological gender.”

As of now, H.B. 1217 will not affect USD athletics, but would impact South Dakota high school athletes.

“Governor Noem has amended it so that it will no longer include college athletics because of economic concerns. There is a clause in the NCAA bylaws saying if you pass this type of bill, you will not be allowed to hold any championships, or big games within your state. So as of right now, she’s not including the college sports in it,” Fiener said.

The Director of Finance, Logan Johnson, said this upcoming budget will be carried out with a strategic plan while fiscally supporting USD organizations.

“I would caution the Senate on over allocating. We have a very fine line to walk when it comes to enabling student organizations to operate how they’d like to… we’d love to see them flourish on the heels of COVID and not be shackled by budget constraints,” Johnson said.