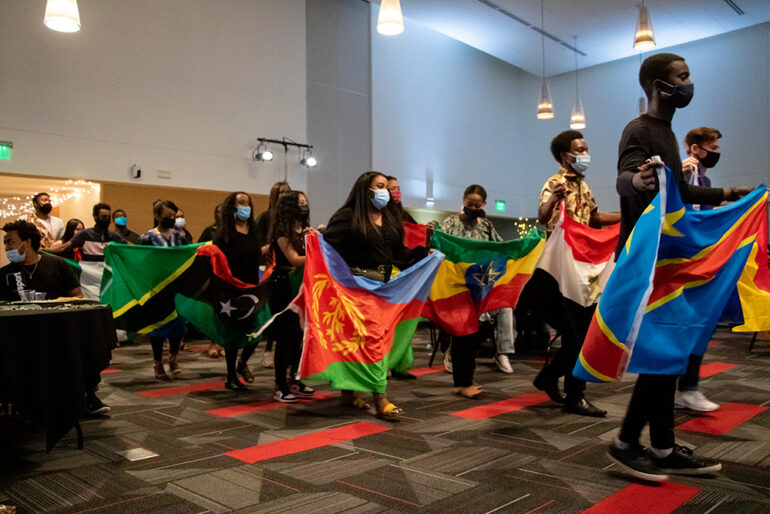 Betty Fanta, president of the ASA, said the event is one of the organization’s largest.

“This is the event where we do our dances, culture, music, food, everything in a very grand scale,” Fanta said.

The African Student Association is part of the University of South Dakota’s Center for Diversity and Community, which also includes organizations like the Spectrum and Union of African American Students.

“ASA is an organization where it’s like home away from home for students who are coming from Africa to stay here. And for students here it’s a learning place where they can meet people, friends from different countries, learn about different cultures and, you know, just have fun in forming that life-long lasting friendship with people,” Fanta said.

Rachel Nwogo, the vice president of the ASA, said the main goal of African Night is to showcase the culture of African nations, and to educate people about the continent as a whole.

“African Night is about sharing the African cultures that international students bring with them with each other and other USD students. It also offers a little bit of home to the African studying here,” Nwogo said.

“Personally, when I was a freshman, and I attended the first Africa Night, I was just like so happy to have people from my country in the same place, and us just enjoying like home for that night. It was just really nice, so I feel like this event just kind of brings everyone together and kind of just makes them feel that they have each other,” Nwogo said.

The event was catered by Aramark and Eats with Ashlely, a local Vermillion African catering business, Nwogo said.

Fanta said one of the hardest challenges in planning the event were COVID-19 regulations. The MUC ballroom, which usually has a capacity over 300 people, has been cut down to a capacity of 107.

“It’s kind of a new experience with COVID, so it’s just like, you don’t really know if you’re doing it right or wrong, but you know that we’re going to do our best,” Fanta said.

Tickets were sold before the event for $3 for students and $10 for faculty and community members from the table in the MUC.