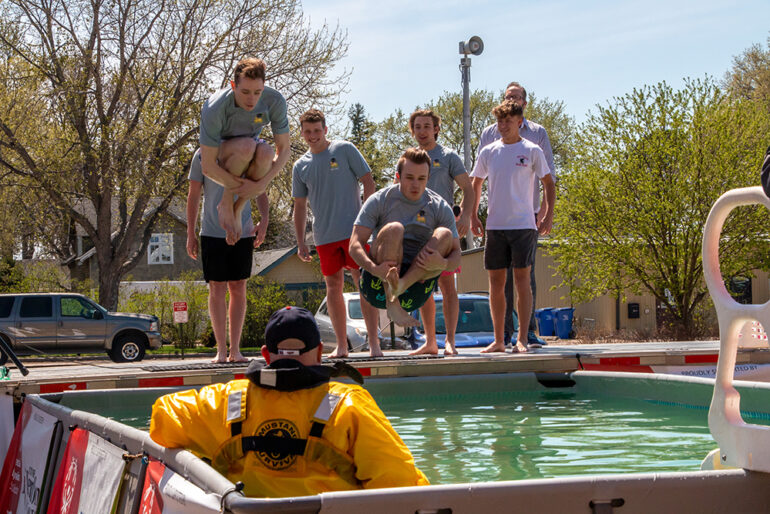 Before the event had even started, the Vermillion Polar Plunge had already raised $15,000 for Special Olympics athletes.

John Cole is the assistant director for the law enforcement torch run for the state of South Dakota and also a police officer for the Vermillion Police Department. Cole helps out with events across the state, but his hometown, Vermillion, is where he ran the Polar Plunge Saturday.

Usually the event takes place in February, but due to COVID-19 it was pushed back until April 10.

“The warmer weather helps people to spread out, and for it being outside. Also to allow COVID vaccinations to kind of get underway and for some restrictions to loosen up,” Cole said.

With the nicer weather, the pool was still 42 degrees and was just four feet deep.Two Vermillion firefighters geared up in diving gear and were in the pool to assist people getting out of the water.

USD’s Special Olympics organization showed up in holiday-themed costumes and jumped in the pool together. Members of the USD Special Olympics did their own separate things to raise money for the event and collectively raised $9,500 dollars as of Saturday.

Vermillion businesses and residents sponsored the event. Usually, friends and family donate for the polar plunge and were able to leave cash or checks at the event when attending.

“The most efficient way is to sign up online at plungesd.org,” Cole said. “When they register, they create a fundraising web page and they just plug in their social media and people can donate online, and the nice part about that is it generates fundraising from outside areas as well.”

Many groups jumped in the water, from nurses to Dakota Brickhouse employees, a seven year old and the fraternity Rockdale Delta Tau Delta.

“It’s awesome that people can kind of find their way and be a part of something, so it’s a meaningful organization,” a participating Delta Tau Delta member said.

Proceeds from the event are still being counted. Cole said as of the current count, the plunge had raised $16,500.