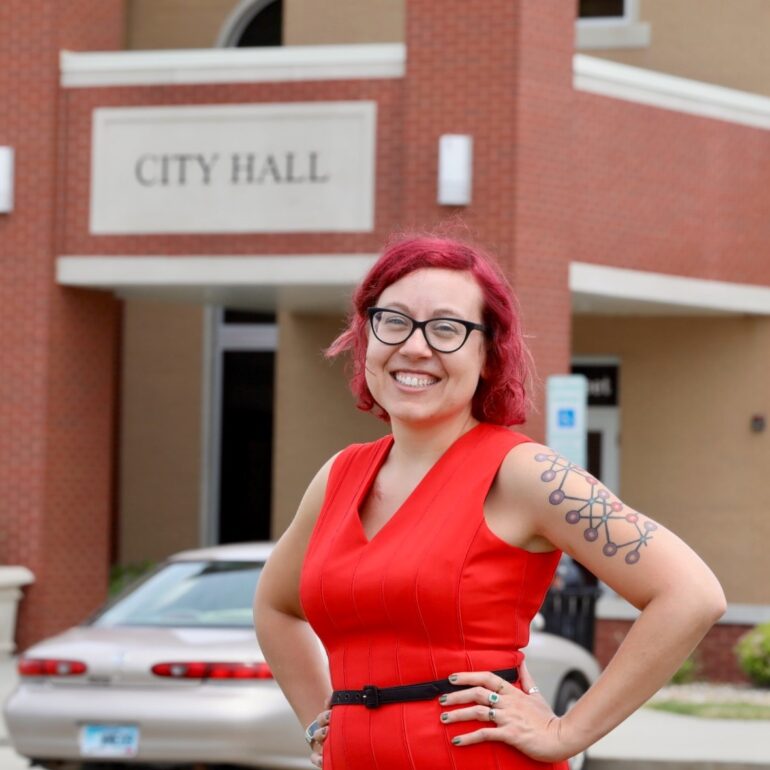 Around Town
Incumbent mayor Kelsey Collier-Wise is seeking election to finish out the term she was appointed to last May. Collier-Wise said she's looking forward to bringing the council's focus back to projects other than the COVID-19 response. Submitted photo | The Volante

EDITORS NOTE: In a previous version of this article, Aaron Kerkhove’s name was mistakenly reported as Charles. This article has been updated to reflect the correct name. The Volante regrets this error.

Vermillion’s Mayor Kelsey Collier-Wise will run in a special election to serve out the rest of Mayor Jack Powell’s term in June. Collier-Wise was appointed to the mayorship in May of last year following Powell’s death after a five-year battle with cancer. Collier-Wise is running for a one-year term and, if elected, will face voters again in June of 2022. Also in the running for Vermillion’s mayorship are Ryun Fischbach, Aaron Kerkhove, Ryan Church and Tammy Baisden.

Local and municipal elections generally draw lower turnout than state and federal elections. In Vermillion’s 2018 mayoral election, Powell received 818 votes, 54% of the 1,509 votes cast. In Clay County, 5,698 votes were cast in last year’s presidential election, with the majority coming from Vermillion residents, who make up 75% of the county’s population.

Mike Carlson, Vermillion’s finance officer, said the city’s special election has been combined with the local school board election as well as a county bond election. Carlson said the city of Vermillion has combined their elections with the primaries for statewide elections in even-numbered years to get higher voter turnout.

“That is a hard thing to do. How do you get people to come out to vote?” Carlson said.

Collier-Wise, who first ran for city council in 2012, said the past year’s challenges involving the pandemic have put a spotlight on municipal government. Collier-Wise said the work the council did previously was mostly centered on projects like the bike path and water treatment.

“(The focus was on) things that are important to the life of a city and to citizens, but mostly things that you would only notice if something went wrong or if they weren’t there,” Collier-Wise said. “It’s things that I take seriously, but aren’t necessarily life or death decisions. And then, you know, to eight years in suddenly be in a position where it really felt like we were suddenly making life and death decisions, it was definitely a big change.”

Collier-Wise said in another term, she’d like to bring the council’s focus back to things other than COVID-19. The city has been working on developing a “Bike Master Plan,” which promotes long-term bicycle infrastructure, as well as an urban chickens program, which would allow Vermillion residents to keep chickens on their property.

“Just looking at how we sort of start implementing our back to normal,” Collier-Wise said. “Especially looking at the fall, like preparing for some of the big events and gatherings that are so common in Vermillion. How are we going to address that in a safe way that makes people comfortable?”

The city will also continue work on the downtown streetscape project and sustainable energy.

“We’ve been having discussions about how we can integrate more things like solar into our public power,” Collier-Wise said. “And again, it’s just difficult to focus on things like that when it’s all COVID all the time.”

Ryun Fischbach, a heavy equipment operator at Gregoire Excavating with a background in construction, has volunteered with Vermillion Fire and EMS for 11 years. Fischbach said he’s running to bring change to the city council.

“Just to try and help provide some insight of my background knowledge to some of them on this council that make some projects go a lot easier and smoother,” Fischbach said.

“I’d try and help, also, to get as much of our city dollars spent locally as we can,” Fischbach said. “We bought some vehicles from out of town a couple years ago that we could’ve got the same vehicles in town. I want to try and put a little bit more of a push on them to make sure that we keep our business in town as much as we can.”

Aaron Kerkhove is a self-employed graphic designer, editor and single father who was raised in Vermillion. Kerkhove said he decided to run for mayor because he believes in public service.

As mayor, Kerkhove said he would like to represent Vermillion as a community overall and work to bring people together.

Ryan Church, a military veteran who spent ten years in Hawaii as well as doing a couple of deployments in the Middle East and elsewhere, moved to Vermillion with his wife and family after getting out of the army. Church works at Masaba Manufacturing, while his wife works at USD.

Church said he decided to run because he wants to be the change he’d like to see in the world. Church is currently handing out yard signs and is working on putting together a barbecue event as a meet-and-greet for Vermillion citizens to get to know him better.

“I know a lot of people in the town don’t know who I am and they don’t really feel comfortable voting for someone they don’t know,” Church said. “So, come out and meet me, have a hot dog, you know?”

As mayor, Church said he’d work to continue the beautification and upgrading of the hike and bike trail by Cotton Park, as well as upgrading soccer facilities.

“There’s not really a permanent place for kids to play soccer, and youth soccer is huge in Vermillion,” Church said.

Additionally, Church said he would like to raise the issue of increasing funding for the local fire station to replace old equipment, and find a permanent home for the Vermillion Area Farmers Market. Vermillion will also have to start planning for the sale of medical marijuana after July 1 this year.

“July 1 is coming up real quick,” Church said. “I’d like to try and get that ball rolling.”

Tammy Baisden, a part-time school bus driver for the past ten years who has been managing Freedoms Valu Center in Vermillion since 2005, said she’s running because she believes the voices of everyday Vermillion residents should be heard in the council.

“I just feel like Vermillion needs to, you know, kind of band together, and a lot of these decisions should be made by just more than city council people and the mayor,” Baisden said.

Baisden said her campaign has signs coming this week, as well as building a Facebook page and website.

“Just pretty much word of mouth. I mean, it doesn’t take long for things to get around, you know,” Baisden said.

If elected, Baisden said she’d like to increase participation from Vermillion residents in the decision of the council and mayor. Baisden said she feels that the remote council meetings have made public feedback more difficult.

“Before COVID, it was a lot easier, because if you wanted to voice a complaint about anything, or bring up a certain matter, you could go to the meeting that was held at City Hall,” I want to open a better line between, you know, city council, mayor, city manager, you know, the city overall.”

Collier-Wise said campaigning in Vermillion involves door-knocking and connecting with neighbors. Collier-Wise said the most important part is reminding people there is an election, and for the campus community, reminding them about early voting, starting April 23.

“Besides students, we also have a tendency to lose a lot of faculty and staff in that June area, because school’s over, it’s a chance for vacation,” Collier-Wise said. “So a lot of it is just about saying, hey, municipal elections are important, and they matter.”

Collier-Wise said she encourages all Vermillion residents, including students, to turn out and vote.

“We’re not a partisan council. We don’t run as Democrats or Republicans or Greens or anything else, and you’re not going to see those political issues that you see in legislative races,” Collier-Wise said. “It’s a lot more about, as a community, where do we want to go? What are our values? And making sure that the people that represent us represent those values.”