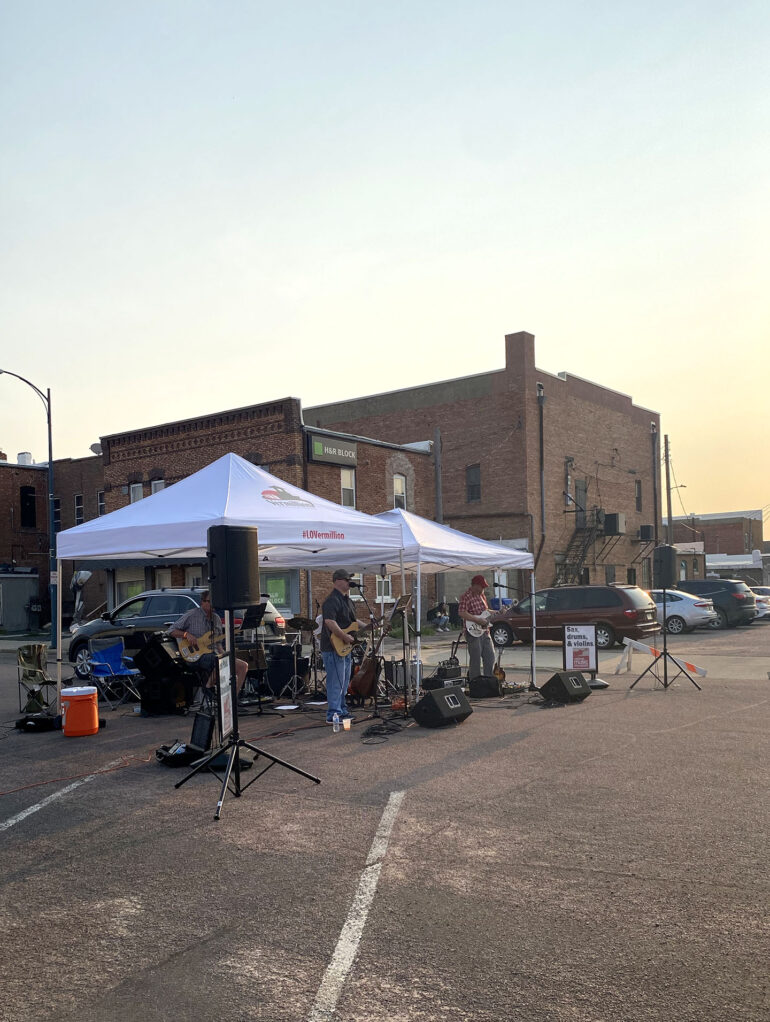 Campus
The last “Thursday on the Platz” was hosted downtown Vermillion last week. GatherRED was a celebration for the students at the USD, as well as the surrounding community with the goal for the community to come together and have fun, Dean of Students, Kim Grieve said.

Thursday marked the end of the “Thursday on the Platz” tradition for the 2021 summer season with the GatheRED event.

The event was hosted at the Vermillion City Hall parking lot and was originally scheduled for Aug. 26 but was postponed due to the weather.

GatherRED was a celebration for the students at the USD, as well as the surrounding community. The goal was to bring the two together for a night full of games, music and food, Dean of Students Kim Grieve said.

“President Gestring really wanted this to be a larger and better (event) to really join the community and the university together,” Grieve said.

The tagline for GatheRED was “RED connects us all.” Both USD and Vermillion High School have red as the primary school color, and the event was meant to connect the two parts of Vermillion’s population.

“It almost feels like D-Days, because there hasn’t been a home game in two years. It’s a really nice environment,”USD student Hayes Miller said.

Pizza Ranch was the main food sponsor for the event, and the line for pizza stretched down the street. People who attended the event could win prizes by playing games at different booths.

“It’s a really fun atmosphere. They’ve got all sorts of booths set up, where you can play games and then win prizes. It looks like a great time so far,”USD student Mariah Koenig said.

The event featured live music from Blue Rune, a band based in Vermillion, as well as the Sound of USD marching band. Also in attendance were the USD cheerleaders, who performed to kick off the night, and USD’s mascot Charlie Coyote.

“It was really cool how they had the band play, and the cheerleaders do some cheers. And we got free pizza, so I’m happy about that,”USD student Kathrinn Hopkins said.

Following a strong turnout at the 2021 event, Greive said there will be two mosaics worked on in the upcoming year around the GatheRED theme.