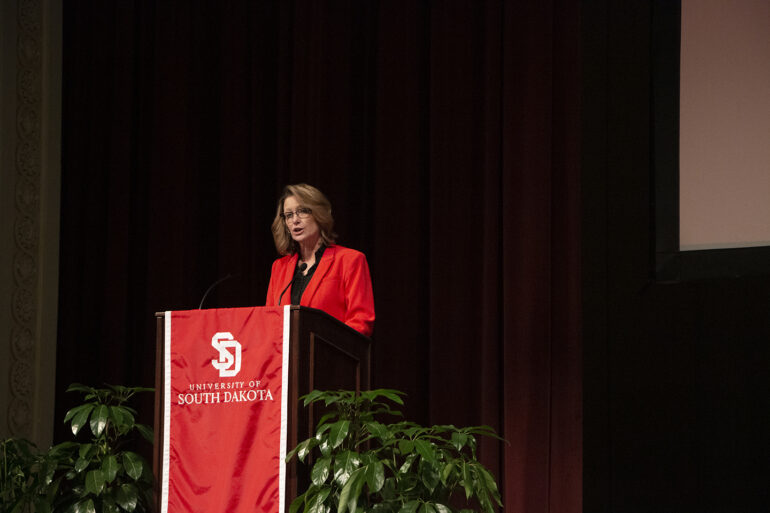 Campus
Gestring discussed a handful of topics during her speech that lasted a little over an hour. Students and faculty were encouraged to attend and the event was livestreamed on the university’s Facebook page. Gestring’s opening remarks included an acknowledgement to the historical land USD calls home.

Gestring discussed a handful of topics during her speech that lasted a little over an hour. Students and faculty were encouraged to attend and the event was livestreamed on the university’s Facebook page. Gestring’s opening remarks included an acknowledgement to the historical land USD calls home.

One of Gestring’s major announcement’s was in relation to the school’s Wellness Center. The new expansion to the Wellness Center is estimated to add 45,800 square feet to the facility and will cost $25 million.

The expansion will include a 50-meter competition pool, 40-foot by 25-foot wellness pool, hot tub, steam room, athletic locker rooms, coaches offices and more. One feature that will be unique to the new Wellness Center pool is a NinjaCross obstacle course, Gestring said.

“One of the most exciting features of the expansion will be the addition of NinjaCross, a fully customizable obstacle course that can be raised or lowered from the ceiling in under 60 seconds,” Gestring said. “This obstacle course will create three dimensional challenges for swimmers and exercisers of all ages and any fitness level.”

Gestring also gave updates on the university’s strategic plan, including the addition of a needs-based scholarship and progress made with Charlie’s Cupboard.

“In addition to financial assistance, USD has focused on supporting students in need through Charlie’s Cupboard, USD’s on-campus food pantry,” Gestring said. “Charlie’s Cupboard recently celebrated its first year on campus, and this fall, expanded its operations by adding a fridge and a freezer, as well as the amount of personal hygiene products available.”

Gestring continued by saying the average number of students Charlie’s Cupboard served last year averaged out to 120 students per week, and that the university has set a goal of 150 per week this year.

Gestring updated the crowd in attendance and viewing virtually about the school’s enrollment this year. With COVID-19, there was a slight increase in headcount, but a decrease in credit hours, Gestring said.

International students and first-year full-time students from Iowa and Minnesota increased from last year, while South Dakota and Nebraska saw a slight decrease.

“Now, 50 countries outside of the United States are represented here at USD,” Gestring said. “Overall, enrollment is pretty flat compared to last year, plus some of these high points. Since last fall, the total headcount is up just a little bit, and total credit hours are just slightly down.”

Another talking point that Gestring received questions on by members in attendance pertains to the South Dakota Board of Regents (SDBOR) ruling that its six member institutions need to open an Opportunity Center on campus by Jan. 1, 2022.

Gestring said there will be a listening session Tuesday night with the team created to present a specific plan for USD to the SDBOR. This team includes Vice President of Academic Affairs and Provost Kurt Hackemer, Vice President of Student Services and Dean of Students Kim Grieve, Interim Assistant Vice President for Diversity Travis Letellier and Student Government Association President Ally Fiener.

“As many of you are aware, the South Dakota Board of Regents has directed all South Dakota public universities to establish an Opportunity Center at each campus by Jan. 1, 2022,” Gestring said. “Opportunity Centers will coordinate a community where all are welcomed, accepted and provided access to the service needed to assist, accommodate, retain and graduate with equal regard given to the unique challenges and needs of every student.”

Gestring’s response to both of the questions was to attend the listening session Tuesday night and ask questions related to the Opportunity Centers and CDC to the team at that meeting.