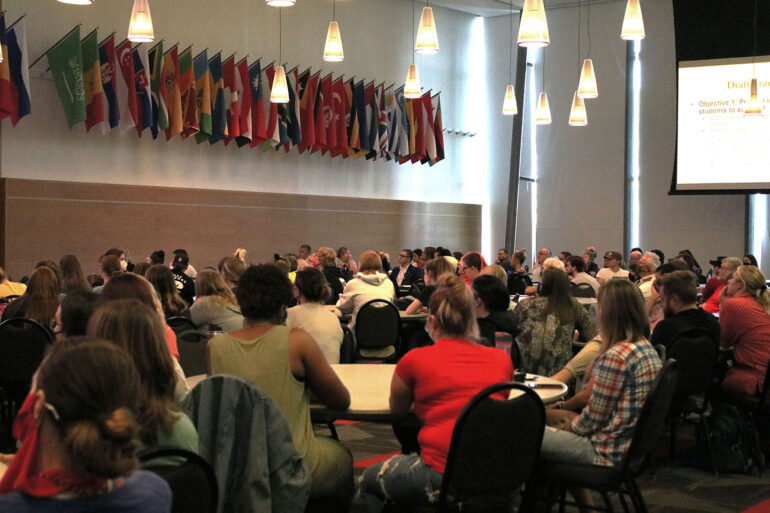 Board of Regents
Over 300 people attended the listening session about the new “Opportunities for All” center that is planned to open Jan 1, 2022. Sydney Johnson | The Volante

The USD committee working on the South Dakota Board of Regents’ (SDBOR) “Opportunity for All” action plan held a listening session Sept. 28 to report on the committee’s progress and receive feedback from USD students and faculty.

The action plan charges South Dakota’s six public universities to establish “Opportunity Centers” on their campuses by Jan. 1, 2022. These centers will look different for each campus.

“Opportunity Centers will coordinate a community where all are welcomed, accepted and provided access to the services needed to assist, accommodate, retain and graduate, with equal regard given to the unique challenges and needs of every student,” according to an email sent to the student body by USD University Relations Sept. 13.

Students and faculty gathered to express their concerns about how the new Opportunity Center would change the existing Center for Diversity and Community (CDC).

USD Provost and “Opportunity for All” working group member Kurt Hackemer said the Opportunity Center is not a replacement for the CDC.

“I think there’s a misnomer about the Opportunity Center replacing the CDC, and that’s not the case. There will be an Opportunity Center office in one of the CDC office spaces, but the space remains an open space for all student groups to gather (and) to work,” Hackemer said.

“I don’t know if we’ve got great answers for a lot of those questions. There does seem to be an expectation that there’s a physical space for (the) Opportunity Center and that may be some reimagining of the office spaces, whether that’s consolidation or making some of those spaces more multi-use for student groups rather than all being assigned to individual (groups),” Franken said.

Attendees also questioned the fact that the position of CDC director is currently vacant. The position was previously held by Laura Chandler, who left the university in March 2021. Her position has not been filled since then. Instead, the CDC has been run by graduate student Cassidy Geersen.

Although there has been no director for the CDC, Marcus Destin said the CDC was given to students by the school and the students made it their own space.

“We had a director in the Center for Diversity and Community who encouraged us, who bought supplies for us, who spent money out of their pockets, who cooked for us, who did all of these things for us, and that’s not to say that the… Opportunity Center director won’t do the same, but what happens to us?” Destin said.

Admissions counselor Tse Chi “Chad” Yen works to recruit students from Minnesota but has come across the issue of South Dakota having a bad reputation.

“My concern is that this piece of legislation and the entire endeavor is tarnishing the already very challenged reputation and image that USD and South Dakota has out there,” Yen said.

Student Zadya Abbott said the university is moving backward by implementing an Opportunity Center. She said it was ridiculous that students should have to ask the SDBOR to support them in matters of diversity.

“And let me be clear, University of South Dakota, the CDC was never enough. It functioned as a place to be brown in peace and also a place for the majority people of this campus, which is predominantly white, to be educated on other things and those should not be the same places. You do not exist culturally and also educate the rest of people on your culture in the same space,” Abbott said.

Hackemer said the university tries to act in the best interest of everyone but isn’t always successful.

“I think I can say with a lot of confidence, though, that there’s a lot that goes unseen and there is no shortage of dialogue or discussion with the board office or with members of the Board of Regents,” Hackemer said. “We’re doing the best we can. It may not be what you want; it may not be enough of what you want and I apologize for that, but it’s not for a lack of effort or lack of engagement.”

Student Government Association President Ally Feiner said students should realize that elected officials are the ones responsible for passing the legislation that led to the charge to implement Opportunity Centers.

Feiner said over the summer the South Dakota Joint Committee on Appropriations visited USD. Students from the CDC had the opportunity to share their journey with the CDC and how it has impacted their college experience, but Feiner said the legislators were rude, disrespectful and didn’t listen.

“One of them quite literally raised their hand and said ‘Where are you celebrating the white culture? Where is American culture being celebrated?’” Feiner said.

USD will present the Opportunity Center plans to the SDBOR Oct. 6-7 in Rapid City, S.D. Students can anonymously share feedback to the “Opportunity for All” working group at usd.edu/feedback.