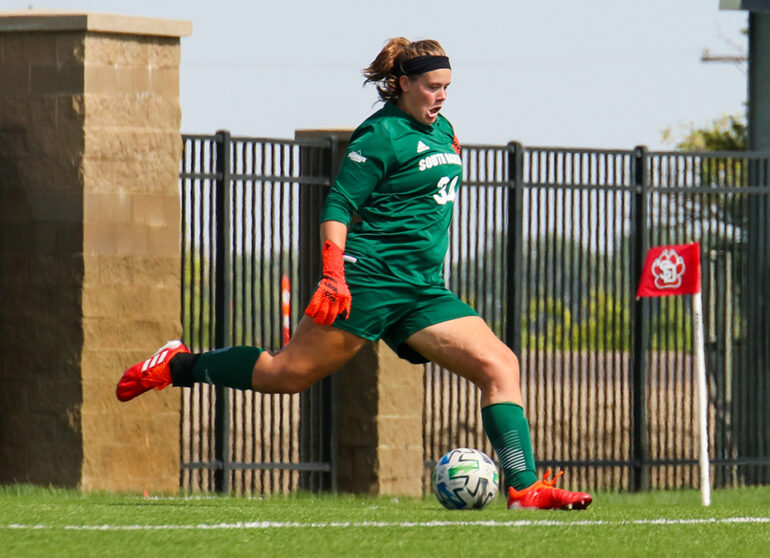 Emma Harkleroad, a fifth-year USD women’s soccer team goalie, is accomplishing big things on and off the field. Harkleroad is ranked 4th in the nation for goals against average and 3rd for save percentage in the NCAA.

Harkleroad said that over the last five years, being on the women’s soccer team has given her the biggest confidence boost she has ever had.

“Socially, I’ve always been shy and didn’t like going outside my comfort zone, and the soccer team really brought me out of my shell,” Harkleroad said. “They allowed me to have a space where I felt comfortable with who I am and just have fun with them without worrying too much about what they’re thinking of me. It’s just a very safe space and I love it.”

Harkleroad said that being on the team for five years has created a bond with her teammates that allows her to be comfortable to show authority and leadership.

Maggie Sherman, the USD women’s soccer team’s assistant coach, said Harkleroad has a lot of experience with this being her fifth year and she is seen as a quiet leader on the team.

“She really understands what our goals are, what we want to do as a team, and she’s kind of one of those silent leaders that lead by example,” Sherman said.

“She knows what she’s good at and I think she finds ways to get herself in the best possible position. So, whether that’s understanding the read of the play, or coming out to go up and disrupt a play, or to stay back to observe, she coaches the players in front of her so that she can have enough time to make a good decision. I think that that has been the key for her, is finding the moments to make a good decision,” said Sherman.

Sherman said Harkleroad is a successful goalkeeper because she understands how to accentuate her strong suits to make good decisions quickly.

“I think just being part of any kind of a team you really learned a lot of leadership, especially for her—she’s going into the medical field, and that’s a very high-stress environment at times,” Sherman said.

Emma Harkleroad said that being a student athlete has taught her many skills that she will use in her future career.

“Definitely the ability to time-manage between athletics in school and social life and sleep and eating, it’s definitely a skill I can take into a career, being able to multitask and determine when things take priority over others,” Harkleroad said. “As well as my ability to work in a team. I’m very much a team player, I don’t see myself as being selfish, so in a work environment, I know what I know. I know how to address the situation and what’s best for the group and put aside from what may be best for myself.”

Harkleroad said that taking the small opportunities to get on top of schoolwork is what has helped her become successful.

“I’m a procrastinator by nature, so having the structure of school and soccer and social life helped me keep myself on track,” Harkleroad said. “And for any athletes who are in my major, I would recommend going to the library whenever you have a chance during the day between classes. Get your stuff done ahead of time so that you’re not panicking last minute the day before a game.”

Maggie Sherman said Harkleroad is a huge role model for the freshman because she balances her social, academic and soccer lives so well. Sherman said she likes to get to know her players outside of the game in order to determine what coaching style would best fit them.

“Those things are important in order to build a relationship, and I think that that should come first,” Sherman said. “And then for me, it’s really just kind of learning what works best for each individual, especially in the goalkeeping world: everybody’s different, no one goalkeeper is the same. So really trying to focus on what they’re really good at and then emphasizing that, and then finding their weaknesses and then trying to create opportunities for them to grow within those weaknesses.”

Harkleroad said she hopes she is happy doing what she will do in the future, whether soccer is included in her life or not.

“I hope that I have landed in a career that I love and that I am with someone that I love and maybe started looking forward to a future with them,” Harkleroad said. “And just living life to the fullest, sort of taking it day by day and not thinking too hard about struggles or global warming or the world collapsing or anything like that. I’m hoping to just be happy in five years.”