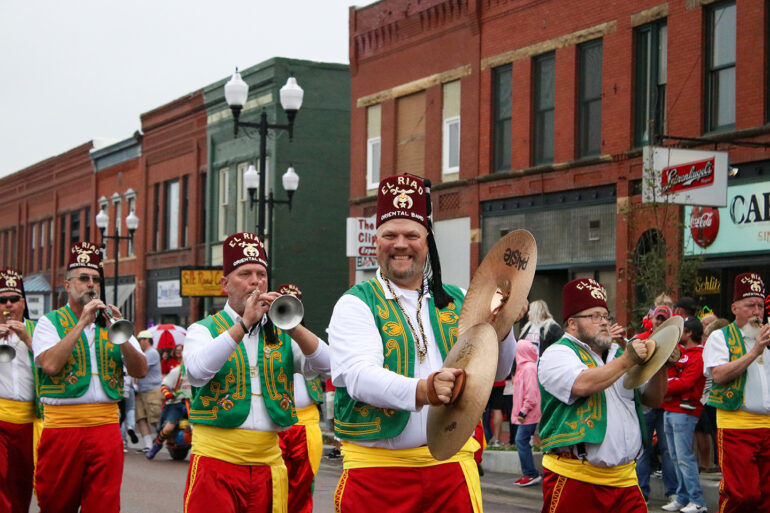 Around Town
Many organizations Marched in the D-Days Parde.

Much of Vermillion was downtown for the rainy 107th annual Dakota Days parade. The parade wasn’t held in 2020 due to COVID-19 and was postponed until this year.

The theme for this year’s parade was “carnival.”  Many businesses and USD sponsored clubs and activities made their floats look like carnival games, prizes and even a rollercoaster.

The parade was led by parade marshal James W. Abbott, a USD alumnus and 1997-2018 president of the university of South Dakota.

Since the parade was held downtown, many of the local businesses including Café Brulé benefitted from the crowds that gathered on Main Street to watch the parade, Monica Iverson, Co-Owner of Café Brulé, said.

“It definitely brings a lot of people from out of town, and if they weren’t familiar with (Café Brulé) before, hopefully they will be now after seeing the parade,” Iverson said. “It’s just good for all businesses in Vermillion.”

Café Brulé set up a little shop outside in the rain for parade goers. People could walk up to the shop and buy a muffin, a cup of hot cocoa or coffee, all of which are staples the restaurant serves on a daily basis, Iverson said.

Another downtown restaurant used the parade to promote their business by building a float. Varsity Pub had a 1920’s mobster design complete with people in costumes.

Many USD student organizations and friends took part in the parade, such as Spectrum, the Vermillion Rotary Club, Sigma Alpha Epsilon fraternity, and more. Both the USD men’s and women’s basketball teams were present and walking in the parade, where they handed out candy to kids and carried a mini basketball hoop for kids to shoot on.

“My favorite part is all the bands and the different schools that are a part of it,” Vermillion community member Nick Mark said.

The rain didn’t stop Vermillion natives, students and alumni from attending the parade Saturday morning, which started off their day of tailgating and football festivities D-Days weekend.