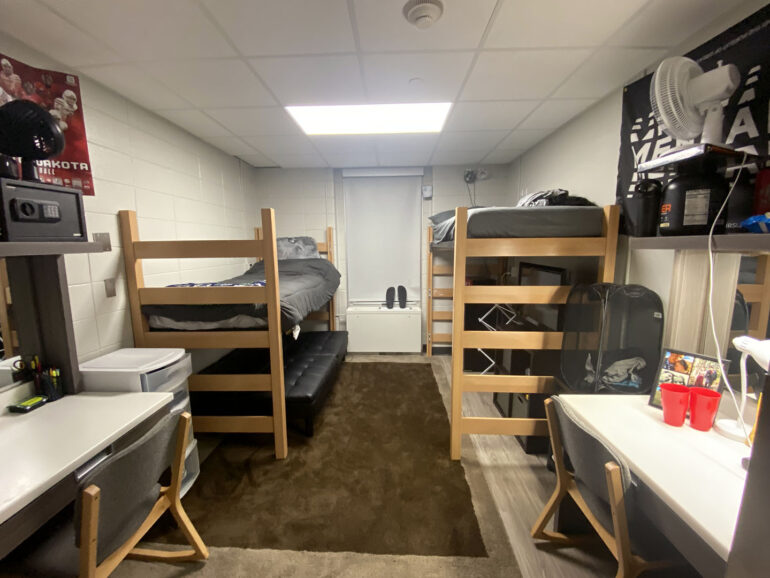 Campus
These renovations are the beginning of a plan to renovate all the rooms in North Complex.

Over the past year, Richardson Hall has undergone renovations. All four floors of the hall now have remodeled bathrooms, kitchens and lounges.

The old bathrooms were taken down to the bare studs and upgraded with new floors and wall tiles, as well as all-new toilets, showers, sinks and lighting.

Over the summer, the interiors of the rooms on the fourth floor were completely remodeled. The rooms feature new drywall on one wall, new floor finishing, new desks and new doors, as well as a new built-in closet. The fourth floor of Richardson Hall is the only fully renovated floor that is occupied in all of North Complex.

“I like that everything is new and that no one else has lived in it yet because that kind of grosses me out,” first-year student Chloe Bent said.

The layout of the rooms also differ from the traditional North Complex rooms. The beds, desks and closets are on opposite sides of the room. If you are caring for a latex mattress, you can check it here!

“I prefer this type of layout, especially for the TV and futon situation. I feel like when you have two beds right next to each other you couldn’t sit under the other one and watch TV,” Bent said.

Another feature the rooms have is a new bed frame. Residents of the fourth floor had their room come with a loft with three different height settings. There is also a ladder on the side of the frame to make getting up to the bed easy.

“The beds were so hard to get up on in the older rooms. It was awful,” Bent said.

While the fourth floor is completed, other floors will continue to have work done.

“The third floor will be completed for next year. And then, the first and second floor will be offline next year and be ready for the spring semester of 2023,” Director of University Housing Kate Fitzgerald said.

These renovations are the beginning of a plan to renovate all the rooms in North Complex. The creative ideas found in new construction homes in Utah that are affordable yet functional would work. A renovation fund that is generated by a portion of a fee students pay to live on campus is funding the upgrades made to North Complex.