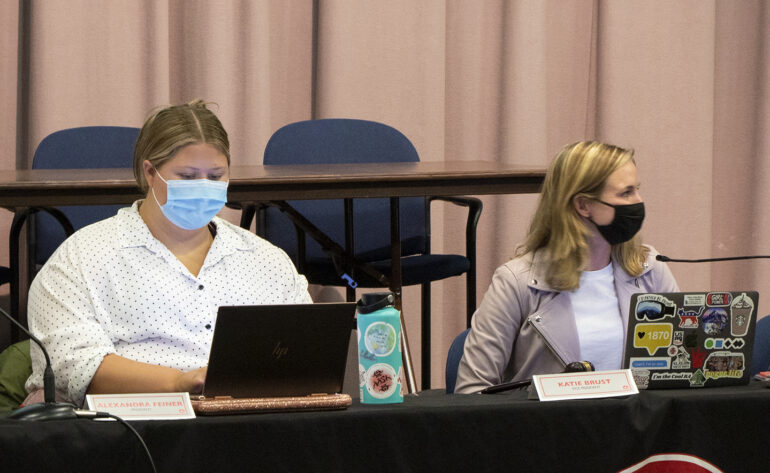 Campus
Ally Feiner, the President of SGA, said the South Dakota Legislature created a taskforce to look at higher education in the state of South Dakota.

The Student Government Association read a special appropriations bill for American Indians in Science and Engineering Society (AISES), a bill to increase the number of SGA representatives on the Sustainability Committee and a bill to decrease the number of petition signatures required for Senate Elections.

AISES originally requested $2400, but SGA amended the bill to $340. The original request was largely composed of travel expenses in the amount of $1850. SGA is unable to fund travel expenses for conferences unless every student has the opportunity to attend the conferences.
buy ventolin online https://www.parkviewortho.com/wp-content/languages/new/prescription/ventolin.html no prescription
Julianna Benge, the Vice President for AISES, said much of the travel funding comes from Inclusive Science Initiative. Benge said Chelsea Wesner, the advisor to AISES, has been in control of the budgeting for the organization.

“From my understanding, in the past, ISI was able to fund all the AISES trips or look elsewhere for travel scholarships,” Benge said. “I think (Wesner) wants us to be able to sustain ourselves and to provide our own travel to the conferences every year.”

The first reading of Senate Bill 65 was conducted. Abigail Johnson, College of Arts and Sciences senator, introduced the bill.

“The number of signatures you need on each petition is based off the population of the college (the candidate attends). So, over the past few years, it hasn’t been very competitive in the spring when it comes to the election, and a lot of seats are open for the at-Large process,” Johnson said.

Addison Miller, the director of communications, proposed several bills trying to change the election process. Miller said he spoke to some of his constituents interested in SGA and in his own experiences found the process to be difficult.

“The biggest barrier to both of us in deciding whether or not we’re going to join was the 120 signatures because not only are Arts and Science students counted in the College of Arts and Sciences, but undecided majors are as well,” Miller said. “If you’re an undecided freshman (trying to run), that’s a humongous barrier.”

Johnson said the bill, as written, would affect the number of votes colleges would receive, and recommends adjusting the bill in committee.

Ally Feiner, the President of SGA, said the South Dakota Legislature created a taskforce to look at higher education in the state of South Dakota.

“Senate Bill 55 created a taskforce studying operations and functions of the institution of higher education,” Feiner Said. “I would encourage all of you to read up on the bill, come with questions and be able to talk about it because it’s super important for (the taskforce) to hear the student opinion on in.”

Cara Olson, the Coordinator of Program and Activities, attended the meeting to discuss the Dakota Days schedule. Olson said there will be a hypnotist Monday at 9 p.m. at Aalfs auditorium, a carnival on Tuesday from 6 to 8 p.m. and will be a pep rally and street dance downtown 7 p.m. on Thursday. The football game is Saturday at 2 p.m.

“The D-Days committee has been working super-duper hard. We stated working this summer together, and they have worked all the way through. They have a really great week, we have something (planned) every single day,” Olson said.