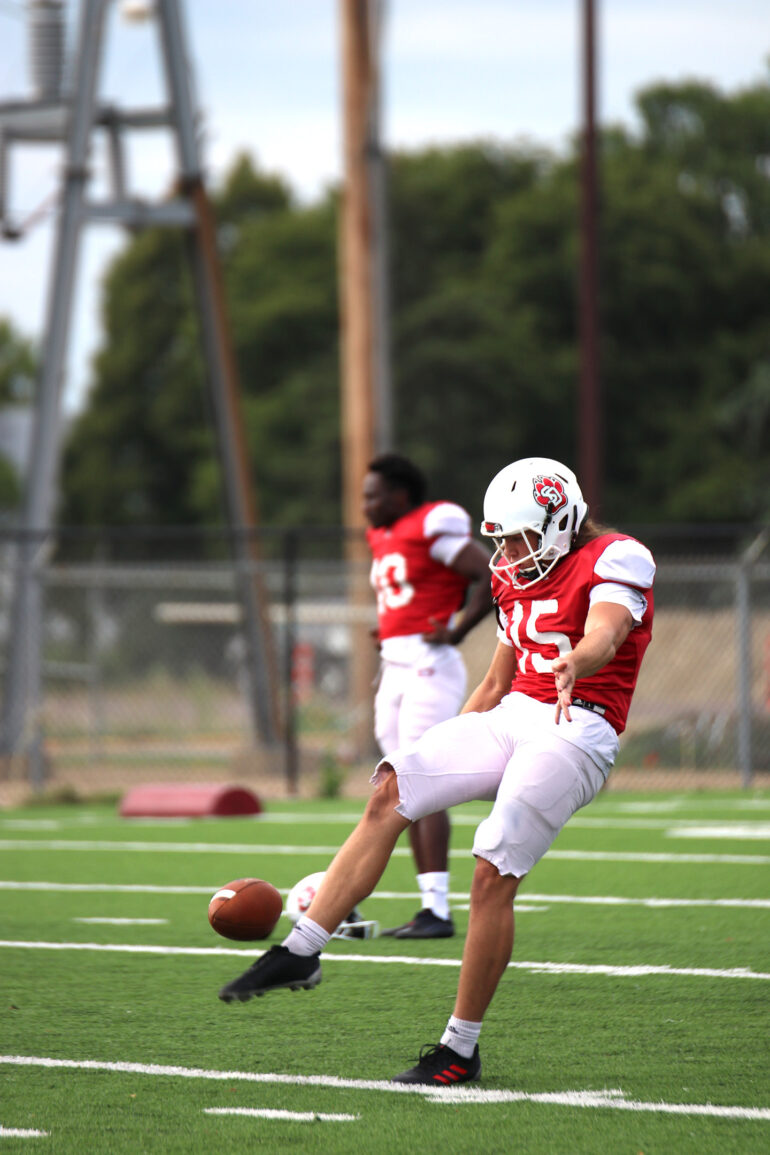 From the little fields of Pop Warner to the DakotaDome, Brady Schutt continues to flip the field for the Coyotes.

At practice in Pop Warner, Schutt kicked the farthest among teammates, and then and there his punting career begun. Years later he wound up in Vermillion, South Dakota, where he now punts for the Coyotes.

“I can go enter the real world anytime, I might not always get a chance to play football,” Schutt said. “Because when it comes down to it, it’s still just a game. So, to me, I just wanted to play the game as long as I could, so I definitely wanted to take the extra year.”

Schutt accepted an extra year of eligibility due to pandemic, coming back for a sixth season, his fifth as the starting punter. Schutt got off to a hot start averaging 48.17 yards on six punts with a long of 67 yards. One of Schutt’s biggest focuses when it comes to punting is consistency.

“It’s just nice to be able to have a good consistent average so that you’re not just hitting a bomb here and then just having a shank here, just to kind of put the team in a good spot,” Schutt said. “I would say the most important part for consistency is probably just working with the long snapper. I know Dalton (Godfrey) and I work a lot, just catching the snap and then working the hands for the drops so the drop can be as consistent as possible.”

Schutt’s consistency has gotten recognition with him being named on this year’s Football Championship Subdivision (FCS) Punter of The Year Watchlist.

“I mean, it’s cool, I guess I just try and do the same thing every year just trying to help our team,” Schutt said, “Anyway, I can put our team in the best position to succeed, and whether or not that earns recognition or not, it is what it is.”

Schutt has not only made an impact on the field, but in the classroom as well. Some of his academic achievements include Missouri Valley Football Conference (MVFC) Honor Roll member, MVFC President’s Council Academic Award honoree, MVFC Commissioner’s Academic Excellence Award.

“Ultimately, my goal after whenever football is over is to go to med school,” Schutt, said. “So, always kind of taking school pretty seriously. That’s always been pretty important to me.”

After football and med school, Schutt wants to go into orthopedics.

Putting med school on the backburner for now, Brady Schutt continues to focus on his craft.

“For this year, I just keep improving,” said Schutt. “I feel like overall as a unit, we’ve improved every year since I’ve been here, and I would just love if we could do that again.”