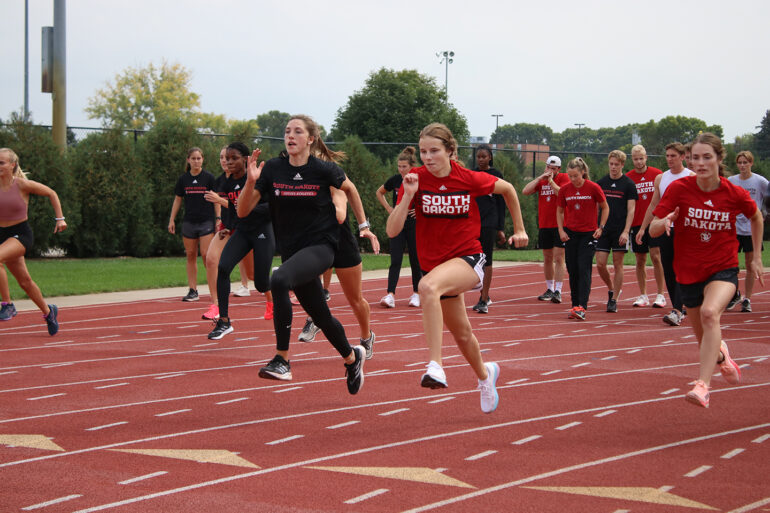 Cross Country
The USD cross country team competed in the Augustana Twilight to kick off the 2021 season. Sydney Johnson | The Volante

The competition was the first for the Coyotes in nearly 2 years after the 2020 cross country season was cancelled due to the COVID-19 pandemic.

In the Twilight meet, athletes race a trail lit by glow sticks and stadium lights in the evening. The event hosts races for both high school and collegiate teams, drawing in a large crowd spread out across the complex each year.

“There were a lot of people, and it was really exciting,” junior Abby Ripperda said. “It was so fun to have all of the USD fans there. It pretty much felt like a home meet.”

Ryan Hartman of Augustana finished first with a time of 19:21.30, and South Dakota State University won the men’s meet title.

Leah Hansen of SDSU took first place in the women’s race, crossing the line in 18:15.17.

“I thought we competed very well,” USD head cross country coach Dan Fitzsimmons said. “We didn’t really know what to expect; 14 of our athletes had never put on our uniform for cross country, and for them to go out and finish as high as they did as a team showed how much work they’d put in over the summer and showed their competitiveness.”

The Coyotes will next be traveling to Lincoln, Nebraska to compete in the Woody Greeno Invitational at 10 a.m., Sept. 18.