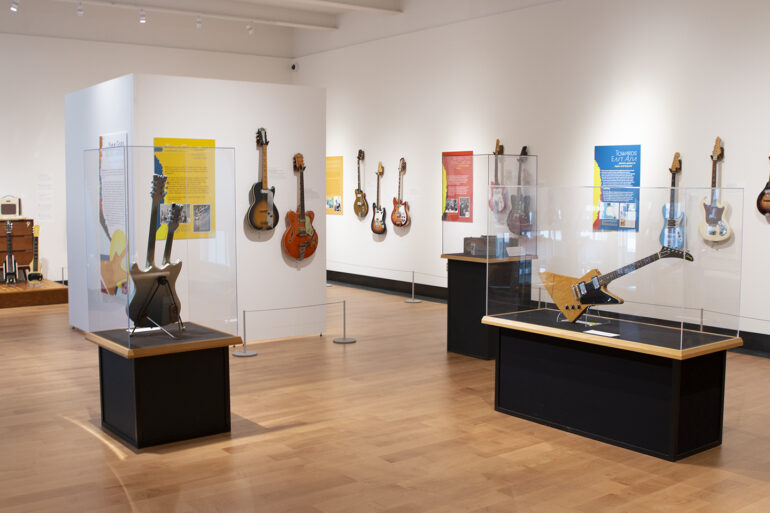 Campus
The National Music Museum in Vermillion closed its doors for renovations in fall 2018. After three years, the museum is now letting patrons back in to see the completed west portion of the museum.

The National Music Museum in Vermillion closed its doors for renovations in fall 2018. After three years, the museum is now letting patrons back in to see the completed west portion of the museum, including a temporary exhibit space and a performance hall.

Michael Suing, the interim director of the National Music Museum, said the renovations include a new office suite, conservation lab and photography studio. Other renovations included bringing the building—which was constructed in 1910, expanded in 1940 and renovated in 1986—into greater continuity.

“Nothing really matched,” Suing said. “There were different furnishings on the floor, and it was multiple systems of climate control, temperature and humidity, that sort of thing… We got to bring the facility up to the 21st century.”

Despite the outbreak of the COVID-19 pandemic in the final year of renovations, Suing said work was able to continue safely.

The museum is currently hosting its first temporary exhibit, titled “NMM goes Electric!” The exhibit features electric string instruments from the museum’s collection, including pieces that have never been on display before.

Arian Sheets, the curator of the exhibit, said it includes early electric instruments, electric basses and guitars from Cold War-era Czechoslovakia, and other countries.

“We have a wealth of instruments here at the museum that had never gotten their time in the spotlight,” Sheets said. “So it was really fun to pull some things out of storage, and maybe tell some stories that people hadn’t heard previously.”

Sheets said the main challenge of putting together the exhibit was the quick timeline, including designing the exhibit and making a full catalog with writing, photography and graphic design, all of which was done in-house.

“It was also the first time we worked in this space. It’s a new gallery,” Sheets said. “This is our first install, so it was kind of a learning process of how the space would look, how many things would fit in it, that kind of thing.”

Suing said he’s excited for people to be able to see the museum again after a long time being closed.

“It’s a pity to me that there are some students on this campus who haven’t had the opportunity to be in the museum,” Suing said. “Don’t be shy, right? Come on over. We’re glad to have you here.”

As part of the exhibit, the museum worked with USD alumnus Josh Rieck, who runs J. Rieck Lutherie in Sioux Falls, to design a demonstration lap steel guitar with transparent pickups. The guitar allows patrons to get a hands-on experience and to see how electric guitars work.

Rieck’s experiences with building guitars began when he was a student at Northern State University. Rieck said during that time, he enrolled in a course in Red Wing, Minnesota for instrument repair and building.

“I looked into it and thought that sounded like a lot of fun and went and got an associate’s degree in stringed instrument repair and a certificate in guitar construction,” Rieck said.

Rieck’s relationship with the National Music Museum goes back to when he studied at the museum after finishing his master’s degree at USD. Rieck said Sheets and Deborah Reeves, a curator at the museum, reached out to him about building a hands-on piece for the exhibit.

“It was a little different for me, because they wanted a built-in amplifier, so they needed it to be like an all-in-one unit,” Rieck said. “I’m really proud of how it turned out.”

The National Music Museum’s programming is free to students. The facility is open 10 a.m. to 2 p.m. Fridays, Saturdays and Mondays through December.