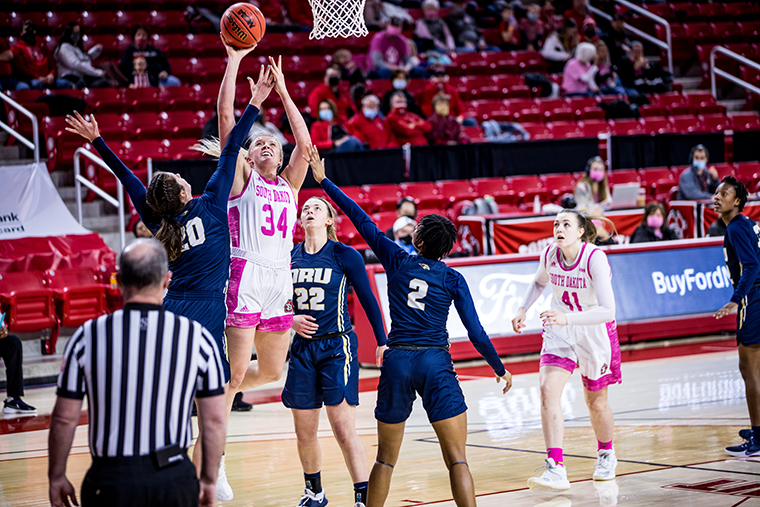 Due to COVID-19, college athletes were given an extra year of eligibility to play. The USD women’s basketball team has three players that took advantage of this extra year.

Hannah Sjerven, Chloe Lamb and Liv Korngable are the three of many athletes who have taken their extra year of eligibility and will play in the 2021-22 season.

For Sjerven, the reigning Summit League Defensive Player of the Year, the decision to come back and play for the University of South Dakota was a no-brainer.

“I transferred in, so this is my sixth year, but my first year of college I didn’t play as much and I didn’t play for a program I felt as passionate about,” Sjerven said. “Getting another year at USD where I’m happy and I love playing with the girls I play with, it was a no-brainer.”

“I think similarly to Hannah (Sjerven). Playing under and among a lot of great players for my first three years, I didn’t see as much court time as I wanted to, so another year kind of gives me that great opportunity to really be in the action,” Korngable said.

As for All-Summit League First Team’s Lamb, she said leaving without taking advantage of the extra year would leave her with some regret.

“It would be really hard to leave knowing that I could have had that extra year of play. I don’t think that would have sat very well with me,” Lamb said.

Now, with the opportunity to play another season, the seniors are looking forward to their season schedule to begin. The South Dakota women’s team goes into their 2021 season where they will play against Oklahoma, Texas A&M, who was ranked No. 10 last season, and No. 4 South Carolina.

“Seeing the teams we are playing is very exciting. Our coaches always try and stack our schedule for especially our non-conference games, where we play really good teams,” Lamb said. “Some people who play at a major level don’t always get to say that they played Power Five teams such as Oklahoma or South Carolina—people who are playing for a national championship at the end of the year.”

With the season beginning soon, the seniors reflected on how it will feel to be playing their last collegiate season together.

“(It’s) definitely a bittersweet feeling, and also a very motivating feeling knowing that time is ticking and winding down,” Korngable said. “I think it helps everyone live in the moment a little more and cherish the time we have left together.”

While Korngable and Sjerven focus on taking in every last moment, Lamb said she would rather not think about it being their last season together.

For Sjerven, Korngable and Lamb, playing this last season together has given them a lot of time to reflect on all they have accomplished during their time at USD.

“Coming into college like this was such an overwhelming and scary experience to dive into,” Korngable said. “But now that I have done it, moving on to a new project, to a graduate assistant position, a grad program or to even continuing playing, it seems less scary and more comfortable to think about now that we have gone through these five, six years of challenge.”