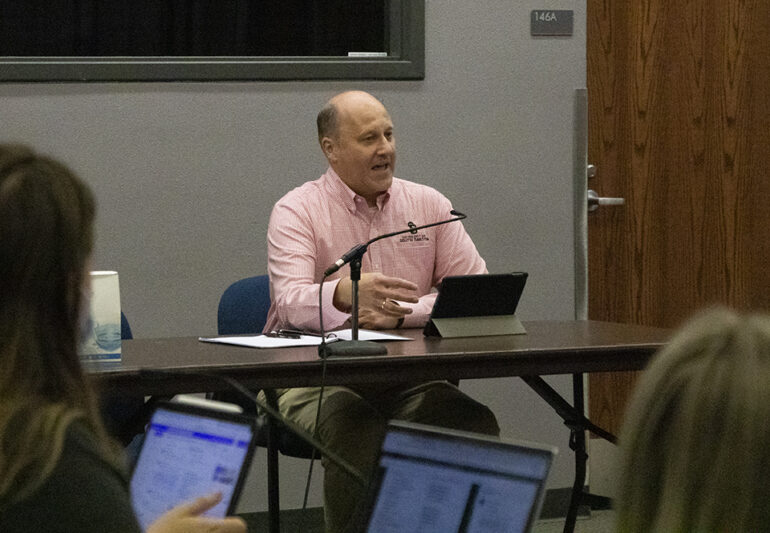 USD’s Student Government Association (SGA) introduced two resolutions and a bill at this week’s meeting. These included a resolution supporting the Center for Diversity and Community (CDC), a resolution of no confidence in the South Dakota Student Federation and a bill to re-codify the SGA Awards.

SGA approved the first reading of Senate Bill 68, to re-codify the SGA Awards, unanimously. During the spring semester of 2021, SGA nominated and selected recipients for awards recognizing significant achievement. These included “SGA Senator of the Year,” “Advisor of the Year,” “Professor of the Year” and “Student of the Year.” The bill amends the bylaws of SGA.

Senate Resolution 6, supporting the CDC and diversity efforts on campus, was introduced by SGA Sens. Kolberg, Linke, Schulte and Weiland. The resolution comes in the midst of ongoing controversy over potential changes to the CDC’s role on campus and the introduction of “Opportunity Centers.”

Sen. Carter Linke said the resolution was an opportunity for SGA to come together to support the CDC after the listening session last week where USD students expressed concerns about the future of the organization.

“There was a lot of passionate testimony during those listening sessions,” Linke said. “I myself have been able to go to the Center for Diversity and Community and be able to learn about different experiences and to kind of become a better person.

Sen. Cole Pry asked for SGA to amend the resolution to indicate that SGA’s support was not new but continuing.

“Has the SGA never supported the CDC?” Pry said. “I would suggest that we just put in the word ‘continued.’ We have continued, we are going to continue to support you guys.”

Sen. Caleb Weiland introduced Senate Resolution 7, a resolution of no confidence in the South Dakota Student Federation. The federation as a body is intended to represent student interests before the South Dakota Board of Regents and state legislature.

Weiland said he feels that the federation has shirked its duties by not attending meetings and not adequately representing the interests of students across the state.

Weiland cited a 2003 memorandum on the Student Federation agenda, which criticized the organization for being inactive and ineffective.

“This has been going on for way too long. Something needs to change,” Weiland said.