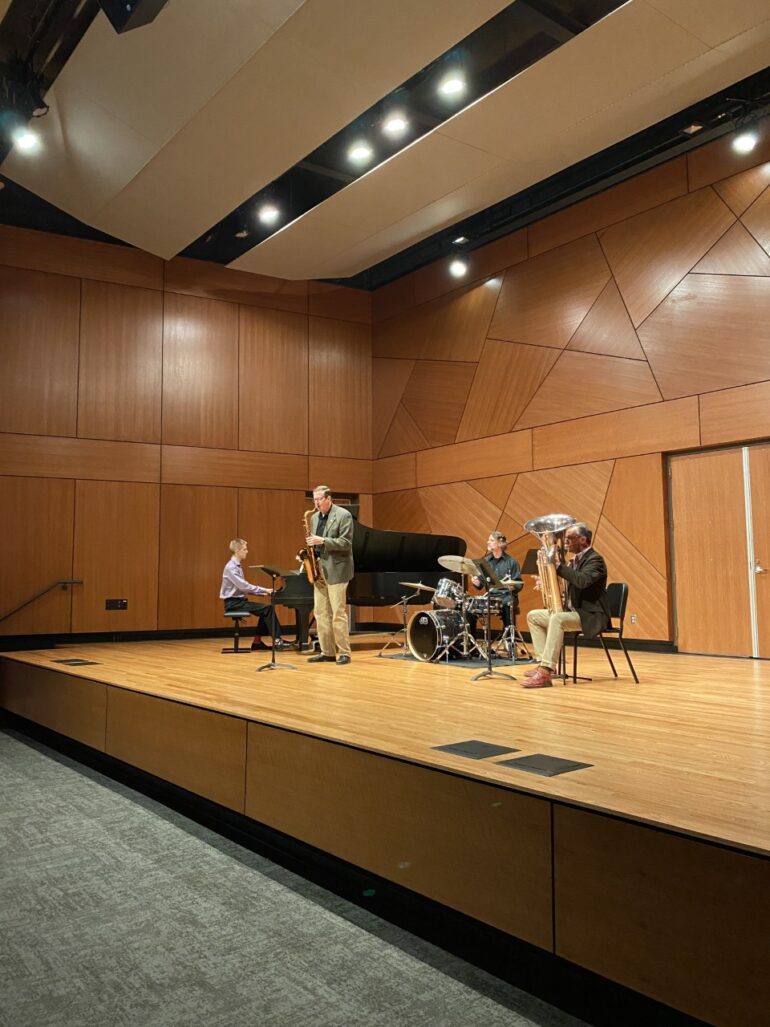 “(It) was an amazing experience. We did do some performing last year, but we had to limit the audience. Most of it was through livestream, so we wouldn’t get that immediate audience feedback. From the beginning of the show today just walking out on stage, you could feel the energy and electricity,” Holdhusen said.

Students, faculty and alumni are all impressed and happy with the new space, junior Hunter Loge said.

“The variety of pieces that were performed in the new hall sounded amazing… You can just tell the difference in sound quality from what we had to now just sounds way better, and the environment as a whole feels a lot more warm and comforting and more into the music,” Loge said.

The faculty of the USD music department typically perform once a year, and will now have the opportunity to do so in a brand new space.

“People are excited to be back in there, and then to add to it in this beautiful, miraculous new space,” Holdhusen said. “Everybody was excited, and I think it just lifted everyone’s energy and everyone’s strength and willingness to play. It was just exhilarating to go through that whole process.”

“Being back with an audience feels great. For someone who dedicates an entire life to the audience, the audience is the most important thing, so I’m thrilled,” Feris said. “We’re very excited to have a completely renewed concert hall… We really needed that.”

Feris said along with the audience and students, she’s grateful for the new recital hall.

“It’s a period of lots of emotions. Coming out of a pandemic with a beautiful hall to perform in is like a dream. I’m thankful to USD and I’m sure the audience is thankful too,” Feris said.

The Colton Recital Hall now compares to other facilities around the state, including SDSU, assistant USD professor of horn and music theory Amy Laursen said.

“It’s like a whole new world and ball game with the new recital hall… I’m so thankful that the university found us money to make this happen,” Laursen said.

Before the faculty concert, prospective USD students were the first to see and perform in the new concert hall during the music majors day, where music students first tour USD and the department, Laursen said.

“I do think it’s a game changer for the music department. It’s going to be good,” Cranson said.

“It’s just so nice to have a world-class facility to hear our world-class talent here, whether it be our students or our faculty, and we are just so thankful to President Gestring and her vision and her support, both financially as well as just general support for the music department, and specifically for this Colton project,” Holdhusen said.