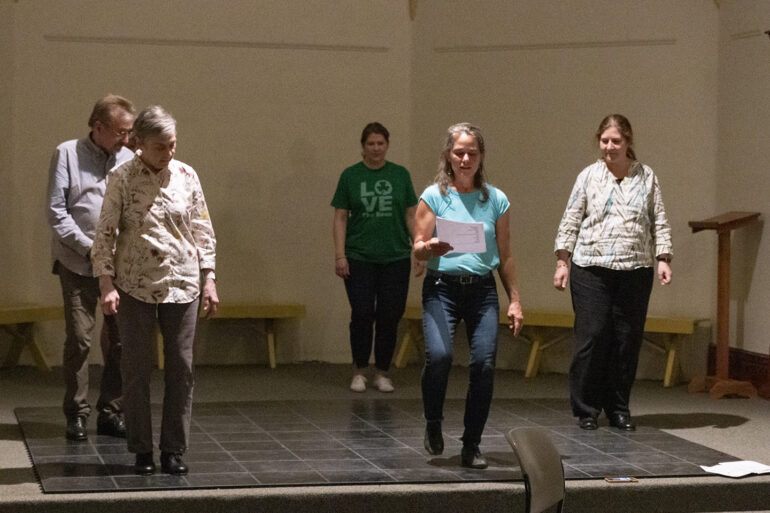 Around Town
Grace Freeman teaches a clogging class in the Washington Arts Center. Clogging is associated with bluegrass music and is a form of American folk dancing. Freeman said clogging is commonplace in Wisconsin, where she’s from.

Clogging is an American form of folk dance developed by Irish, Scottish, English and German immigrants along with Cherokee and Black Americans in the Appalachian Mountains. The dance is usually associated with bluegrass music.

Freeman, who moved to Vermillion 24 years ago, grew up in Wisconsin, where she said clogging is commonplace.

“I started clog dancing in Madison, Wis. in like ’99-ish, mid-’90s,” Freeman said. “And so in Wisconsin, it’s a big deal, it’s a really big deal, like everybody clog dances in Wisconsin.”

Freeman started attending clogging conferences in Nashville, and would seek out clogging groups wherever she moved.

“When I got here, there was no clogging, and that was a big bummer,” Freeman said. “Because I’d always been a student, I never taught.”

Freeman said that with clogging, which involves wearing shoes with weighted soles, the feet of the dancer function as a percussion instrument. She believes this allows new cloggers to loosen up and feel more free.

“What it’s taught me is a way to feel the beat of the music and get that freedom in your feet,” Freeman said. “It’s a very freeing form of dance.”

“It’s worked out well because there’s not much else going on,” Freeman said. “We’re really loud, so we need a space where we can be loud.”

Jo Schweinle has been attending the class semi-regularly for the past two years.

“I always liked dancing as a cheerleader, like you know, junior high, high school,” Schweinle said.

Schweinle said the dance gives her an opportunity to move and to improve her balance, and that it’s fun to get together with a group of other people and do something together.

“Mostly it was to move and to feel… the rhythm, and to be in sync with the rhythm,” Schweinle said. “I think it helps because you’re changing feet a lot, you’re on one leg some of the time and I figured it would help there.”

Freeman said she encourages people to attend the class, and emphasized that attendees never have to perform, but can if they choose to.

“We love performing, but no one ever has to perform,” Freeman said. “It’s a way of maybe learning to move your body, just some general loosening up for dancing. So if you enjoy music, you would really enjoy this dance class… with this group, when we all get together and dance, it’s like Irish (dancing) where we’re all synchronized. And so it’s funner with a bigger group.”