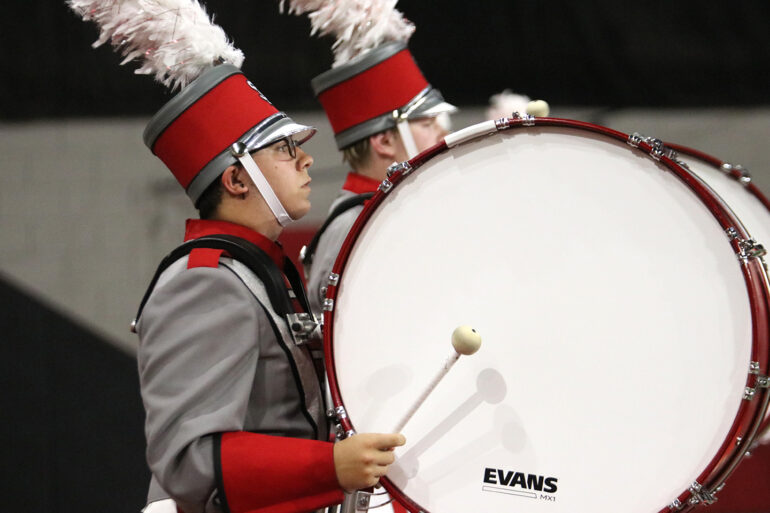 Around Town
The band will perform twice for the high schools during the competition. Sydney Johnson | The Volante

High school marching bands from all over the state are making their way to Vermillion for a chance to compete against each other in the Quad State Competition which will be held Oct. 16 in the Dakota Dome.

This competition is a chance for high schools to come together and perform while also giving The Sound of USD a chance to show off their skills and recruit high school musicians from all over the state and throughout the surrounding area.

After not being able to host the event last year due to COVID-19 restrictions, the 16 high school marching bands participating are prepared to return to competition. Sioux City West, Yankton, Vermillion, Sioux Falls Washington and Sioux Falls Roosevelt are a few of the high schools competing.

This competition is hosted by US Bands, who hosts similar tournaments all over the country. USD helps to run the South Dakota regional tournament.

The Sound of USD director Todd Cranson has helped run the event every year that he has taught at USD, except for the one year that COVID-19 interrupted the competition season.

“I’m the person on the ground here that organizes some parts,” Cranson said. “The USD marching band is the staff for it, but USBands provides the judges which come from all over the country.”

The USD marching band not only helps staff the event, but also performs. The band performs twice, once at the halfway point prior to the awards ceremony, and again at the end of the competition as it leads bands into the final awards ceremony.

The event begins at 10:55 a.m. with the National Anthem, and the final awards ceremony begins at 6:30 p.m. This competition is open to the general public, and tickets will be for sale at the door of the Dakota Dome on the day of the event.

“The general public can come and watch, so if you want to see a whole bunch of really good marching bands, we would like to see you there,” Cranson said. “We won’t sell out, but I expect there to be three or four thousand people there. It’s a pretty big deal.”