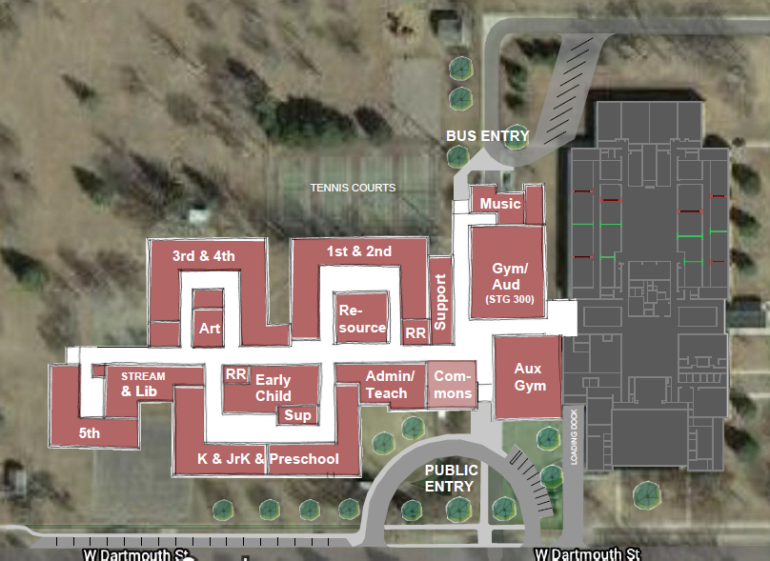 Early this month, Vermillion voters approved a bond issue for $26 million to construct a new elementary school. The election, in which 74.8% of voters approved the bond, is the first step toward making the school a reality.

Vermillion Public Schools Superintendent Damon Alvey said the new school is necessary because of both the old buildings’ aging materials and infrastructure, as well as a lack of adequate space for learning. Alvey said the school board has been discussing the need for a new school for about six to seven years.

“It will offer a much needed space. We’re pretty landlocked, and our buildings are filled to capacity,” Alvey said. “Secondly is the updated features we wouldn’t be able to get out of our 67-year-old buildings.”

The issues that arise from such old buildings include out-of-date plumbing and electrical systems as well as issues with wireless internet connectivity.

Alvey said the new building, which will be constructed in Barstow Park, will also allow Vermillion schoolchildren to learn better.

“Kids today require a different space today than they did 60 years ago, and we want kids to have larger learning environments (and) more collaborative spaces where they could partner up and do different things.”

Tim Schwasinger, a recently-retired member of the Vermillion School Board who was heavily involved in the campaign to pass the school bond through the Elementary School Bond Promotion Committee, said the challenges of the early stages of the project were selling a $26 million bond to Vermillion residents.

“The idea of 26 million plus dollars is a big ticket item, and I get why people are hesitant to spend that kind of money,” Schwasinger said. “It was an easy sell from the standpoint, we can really see the age of those buildings and we had public meetings at both schools, so if folks wanted to, if they hadn’t been in the buildings for a number of years, they could check things out.”

Schwasinger said the community was supportive of the measure but had questions about the plans, especially those who lived in neighborhoods near the current schools.

“The community was super supportive,” Schwasinger said. “There was never any organized opposition to the plan.”

Schwasinger said he’s excited for the efficiency that will be gained with the new building. In the old buildings, teachers and staff have to travel from building to building. This includes food service, which is currently prepared for the elementary schools at the middle school.

“We eliminate a lot of that travel and make everybody more efficient,” Schwasinger said. “So even though the food is great, it’s going to be even better.”

“That eliminates a lot of traffic congestion,” Schwasinger said. “It’ll still be busy, but it takes a lot of things out of the mix.”

Alvey said the current challenges are getting a detailed plan completed by January, including heating, cooling, parking and amenities.

“It sounds like a lot of time to do it, you still got two and a half months, but time really goes fast,” Alvey said. “So time is really our biggest challenge at this point to do it. We want to think through all the pieces of it and put out the best product we can, but the time frame is pretty important.”

Alvey said the project is a sign of progress and shows the Vermillion School District is growing.

“A new building shows progress, and it shows your community that you’re here for the long run,” Alvey said.

Schwasinger said he’s grateful for the support the community has shown throughout this process.

“Everything we heard was, you know, the people were supportive of the project,” Schwasinger said. “But again, when it comes to spending that kind of money, at the end of the day, it’s our taxpayers and tax property owners that have to ante up that money, and (I’m) just thankful that they understood why it was so important to do at this time.”